The Competition is organized by the SNAME Student Steering Committee (SSC), and sponsored by NETSCo Naval Architect and Maritime Engineering, the annual event was created to keep students both engaged and entertained while solving a maritime design/build challenge using strict guidelines. The students were required to calculate the major hydrostatics of the vessel, lightship weight, fully loaded mean draft and trim to estimate the vessels speed while carrying 2 pounds of cargo. Other requirements included: only supplied materials can be used: available time to design was 1.75 hours; vessel’s length < 15 inches (penalty of +1 sec on your time for every added inch); the vessel must have a sail and carry 2 pounds of cargo with no loss while the vessel crosses the pool; and, all parts must move as a whole. With less than two hours to design and construct working models, the ten teams created vessels to compete in a series of two, timed runs and were scored based upon a pre‐determined formula on the vessel performance and design. Theodore Kardaras, Vice-Chairman of the SNAME Student Steering Committee said, “NETSCo has sponsored the Student Design Competition for the past ten years knowing that there is nothing more important than bringing students together from all around the globe in order to exchange ideas and collaborate in the completion of a challenge.”

“Each year we are excited to see such a large number of students participating,” said Richard Mueller, NETSCo President and CEO.  “The SSC does a great job inspiring the youth to pursue a career in the maritime engineering field and we are thrilled to support their efforts.” 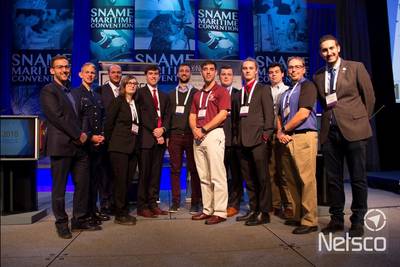