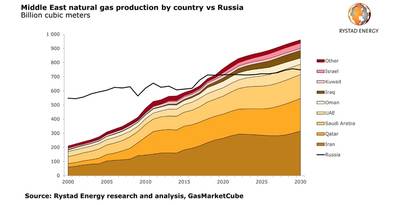 The Middle East is cruising into the second half of 2019 with spectacular gas production, and is expected to surpass powerhouse Russia by the end of the year.

Nevertheless, international markets may not feel the full effect as demand in the region is also expected to see rapid growth. Iran and Saudi Arabia alone could absorb more than 50% of the region’s production by 2030.

Qatar will remain the highest gas exporter in the region and will see a jump in LNG exports as the North Field project ramps up.

Exports from Israel are also expected to grow rapidly which could primarily benefit the European market.