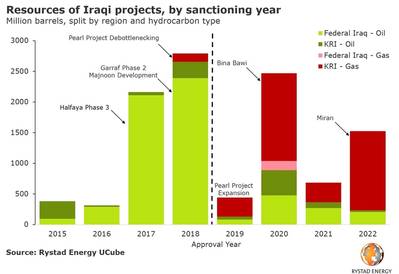 Gas developments in Iraq will overtake oil projects in 2019, measured in resources sanctioned for development, according to analysis from Rystad Energy.

"For the world’s fourth largest crude producer, natural gas is about to take pole position," said a statement from the energy research and business intelligence company.

New developments are on track to triple the country’s gas production from just over 1 Bcfd in 2017 to about 3 Bcfd in 2022, according to Rystad Energy.

It forecasts that gas developments in Iraq will overtake oil projects in 2019, measured in resources sanctioned for development, flying in the face of historical norms for the upstream industry in the country.

“Rystad Energy sees gas as the clear frontrunner in the region over the next four years,” says Aditya Saraswat, Analyst on Rystad Energy’s Upstream team.

The tripling gas production allow the country to satisfy its own growing domestic demand for gas and possibly even launch Iraq into the global market as a gas exporter for the first time, Saraswat added.

The shift is driven by more favorable investment conditions in the Kurdistan Region of Iraq (KRI), combined with consistent export revenues and improved regional security, boosting international oil companies’ (IOCs’) appetite for investment in the region.

Upcoming final investment decisions (FIDs) on new projects are dominated by gas developments in KRI, standing in stark contrast to the oil projects that have typically reigned supreme in Federal Iraq (FI).

Previously, inadequate infrastructure and weak incentives meant that most produced gas in Iraq was simply flared, with just a small portion feeding power plants for commercial use. Upstream developments in the past were also generally oil fields under the jurisdiction of Federal Iraq, and domestic gas demand was addressed primarily through imports from Iran.

Pacified by output in FI, IOCs were also largely uninterested in exploring options in KRI due to the political instability in the region. However, much has changed in recent years as gas imports have grown more expensive and the political situation in KRI has calmed.

A Rystad Energy analysis of sanctioned projects reveals that new gas developments in the Kurdistan Region of Iraq could potentially add 3.3 billion barrels of oil equivalent by 2022.