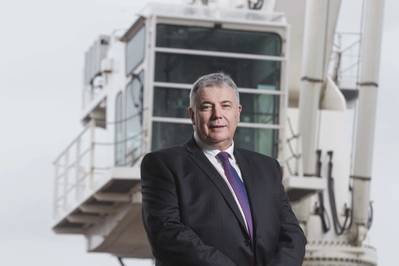 GEOSHIPS Group, a marine and subsea services provider, has completed charter party negotiations with Singapore based Teras Offshore, for a new Offshore Deck Cargo Vessel, resulting in the planned recruitment of a further 40 offshore staff. Formed in 2003, Westhill-based GEOSHIPS will operate, manage and crew the DP1 (dynamic positioning) Loch Seaforth vessel, which has been contracted on a three year bareboat charter, with options to extend.

The Loch Seaforth is expected to be the first of its kind in the North Sea, due to the size and capability of the vessel. The vessel is 158 metres in length, 36 metres wide and has a deck area of a staggering 4,750 square metres - or around the size of 24 tennis courts. The new offshore jobs will be onboard operating and maintaining the vessel and with a heavy deck load capability of 20T/m2 and point loads of up to 300T/m2, it is expected to be busy as a transportation and project cargo solution. The vessel boasts a diesel-electric azimuth propulsion system to increase fuel efficiency and manoeuvrability, and has two bow tunnel thrusters providing speeds of approximately 12.5knots.

It is expected that the vessel will be used extensively for transport and project cargo solutions for both the offshore oil and gas and offshore renewable energy sectors, shipping equipment such as, jackets, mono-piles and subsea templates. The vessel is also suited to the carriage of containers and has a capacity of 864 TEU (Twenty Foot Equivalent Unit.)

GEOSHIPS’ in-house vessel crewing and management department, (previously known as Brooklyn Shipping Limited), will operate and manage the vessel, giving a higher level of control over each project. This department will continue to crew and manage all future vessels GEOSHIPS adds to its fleet. In the past year, GEOSHIPS staff numbers have increased from 10 staff onshore to 18 currently, and offshore staff numbers have risen to 80. To meet staffing requirements on-board the expanding fleet, GEOSHIPS expects to have around 300 personnel, including marine crew, in the next three-four years.

Kenny Macleod, chairman, GEOSHIPS, said: “Taking delivery of this highly specified Offshore Deck Cargo Vessel allows GEOSHIPS to broaden its service offering even further. Loch Seaforth is a new concept to the North Sea as it replaces expensive and lengthy operations, which would previously have been carried out by barge and tug boat combinations. “We are continuing to explore opportunities to expand the vessel fleet further, which in turn will mean a further increase in staff numbers. Our plan now is to develop our fleet to seven vessels, under our direct control, within the next three-four years and negotiations are advancing with vessel owners and ship yards to fulfil these plans.”

Taking charter of this vessel follows on from GEOSHIPS securing the DP2 Offshore Support Vessel, Loch Roag, which is currently operating in the North Sea. The multi purpose support vessel, was taken on a five year fixed bareboat charter basis from Singapore based Otto Marine Ltd with an option to extend the contract for two more years. Loch Roag has already secured two contracts with new clients for GEOSHIPS within the North Sea. In Q1 2013 GEOSHIPS will expand its fleet further, with a new multi purpose offshore vessel of a Vik & Sandvik VS470 design. It is certified to carry 60 people and has an overall length of 76m.