Ghana's Historic Slave Forts are Being Swallowed by Rising Seas 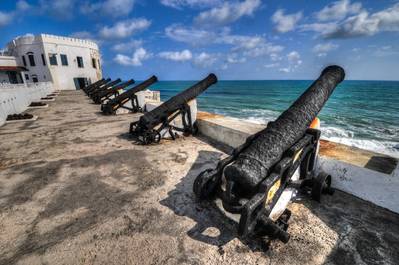 For 21 years, Fort Prinzenstein's caretaker James Ocloo Akorli has watched the Gulf of Guinea's tempestuous waters eat away at both his livelihood and his heritage.

The 18th century Danish citadel, set along Ghana's palm-fringed coastline, was once the last stop for captured Africans before they were forced onto slave ships bound for the Americas.

Today, three-quarters of the UNESCO World Heritage site has been swallowed by the sea.

"There have been mornings after a storm when I have come to find large parts of the fort have just disappeared," Akorli lamented as he stood by the monument's crumbling walls a few metres from the shore in Keta town, 180 km (110 miles) east of Ghana's capital, Accra. "Whole structures, including the main dungeons, are now in the sea."

Between 2005 and 2017, 37% of the coastal land around the town of Keta was lost erosion and floods, according to research conducted by Ghana University's Institute of Environment and Sanitation Studies (IESS).

Currently, the coastline is eroding at an average annual rate of about two metres (6.6 feet) - but some areas have recorded up to 17 metres (56 feet) of erosion in a single year.

"As well as sea level rise, climate change is increasing the frequency and severity of storm surges and floods, leading to increased erosion in coastal areas," he told the Thomson Reuters Foundation.

"We've already seen fishing villages in low-lying areas such as Keta being washed away, so naturally, historic monuments are also at risk. Within 20 to 30 years, we will face serious problems if we continue with the business-as-usual approach."

Addo's warning comes days before world leaders gather at the COP27 U.N. climate summit in Egypt, where they are expected to battle over how much financial support rich countries should provide to developing nations to help them cope with the consequences of rising temperatures.

The transatlantic slave trade, active between the 16th and 19th centuries, forcibly removed 12.5 million people mainly from Central and West Africa, and sent them to work across the Americas, Europe and the Caribbean.

Taken by European slave traders, men, women and children were held in horrific conditions in the myriad of colonial trading posts dotted along the West African coast, previously known as the Gold Coast due to the extensive trade in gold.

Crammed into dark, airless dungeons, they were branded, beaten, chained and starved for weeks. Many died before the ships arrived from Europe to take them to the Americas. Others perished in the cramped hulls of boats during the long journey.

These seaside slave fortresses have not only shaped Ghana's history, but have also become places of pilgrimage for members of the African diaspora wishing to connect with their roots and pay homage to their ancestors.

Events such as Ghana's "Year of Return" in 2019, to mark the 400 years since the first recorded African slaves arrived in North America to work in the plantations in British colonies, saw record numbers of African-Americans and European Africans visiting the country for heritage tours.

Foreign visitors to Ghana reached an all-time high of 1.13 million in 2019, generating $3.31 billion in revenues - a 27% increase from the previous year, tourism ministry data shows.

At the 17th century white-walled Cape Coast Castle, 145 km (90 miles) west of Accra, tourists shuffle through the maze of dimly lit dungeons - some visibly upset as local guides detail the conditions endured by the slaves.

As the tour ends, they crowd by the famed "Door of No Return" - a large wooden door leading to the shoreline through which tens of thousands passed before they were loaded onto ships to embark on the treacherous journey to the New World.

"Those of us from the diaspora are the descendants of those Africans who made it across the Atlantic," said Lorna Johnson, president of the tour company Global Linkages, as she supervised her group of a dozen tourists from New York.

"So to be here, to walk in the dungeons, to listen to what happened to them, and see the 'Door of No Return' is painful. People become numb. It takes a while to process, but it's so important to visit these castles. It's a pilgrimage."

Like Fort Prinzenstein, many of the more than 30 UNESCO World Heritage slave forts and castles along Ghana's 550-km (340-mile) shoreline have been seriously damaged - or completely destroyed - by rising sea levels and coastal erosion.

In the sleepy seaside town of Ada Foah, 100 km (62 miles) east of Accra, only traces of another outpost, Fort Kongenstein, remain.

Built in 1783 by the Danish as a trading post and then later used by the British to hold slaves, the main fort has been completely submerged by the sea.

The only remnant left on shore is the decaying shell of the fort's administrative block.

Other sites such as Cape Coast Castle, Elmina Castle and Fort Christiansborg may be at lesser risk as they are built on rocky terrain, say climate scientists. But over time, even they will not be spared, they add.

Hoping to slow the damage, the government has in recent years constructed a series of sea defence walls along parts of the coastline to prevent towns, villages and heritage sites from being inundated.

But climate experts like Addo say the walls are pushing sediment further along the coastline where it is causing erosion in other areas, calling for a more holistic approach.

"These defence walls may be a short-term solution but in the long term they are not the right approach," Addo said.

"Sea walls are fighting erosion, but not managing erosion. We have to look at the entire coastal ecosystem - not just what happens in certain areas - and develop nature-based solutions such as using mangroves."

Addo said as well as climate change, other activities such as illegal sand mining and other development projects were exacerbating erosion and should also be curtailed.

Kingsley Ofosu Ntiamoah, executive director of Ghana Museums and Monuments Board, said the government has approved a $30-million management plan to restore and protect the forts, including from the impacts of climate change.

While Ghana is responsible for only 0.05% of global annual carbon emissions, Ntiamoah said he did not want to blame richer nations for damage caused by climate change to the country's slave monuments - but he did call for financial support.

"The government is doing everything humanly possible, but dealing with the impacts of climate change like the sea level rise and tidal waves is not easy," Ntiamoah said.

"These monuments are located in Ghana, but they belong to the world. We have a shared history, so protecting them is our shared responsibility."