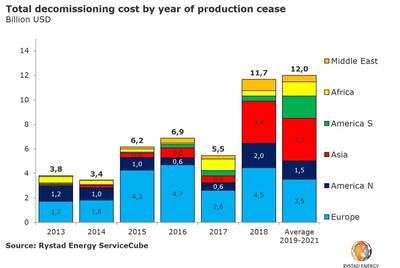 With the global offshore decommissioning industry expected to reach $36bn over the next 3 years, several hundred offshore oil and gas wells could cease production by 2021 in the face of today’s bearish oil market.

As a consequence, so-called decommissioning obligations in the global oil and gas industry rose to $11.7 billion last year and are projected to hold steady at an average of about $12 billion per year from 2019 through 2021, according to Rystad Energy.

“2018 was an all-time high, and the next years are set to break this record,” said Rystad Energy partner Audun Martinsen. “To put this into context, the global oil and gas industry is facing total decommissioning obligations in the magnitude of six Johan Castberg field development projects in the Barents Sea within the next three years.”

A challenging oil market outlook has put many ageing fields to rest as diminishing output proved insufficient to cover production costs. A Rystad Energy review of offshore assets shows that some 9000 wells globally are at fields currently struggling to stay profitable at $60 Brent oil prices.

“This is a relatively high breakeven price that was the Achilles heel of many fields in 2018,” Martinsen said.

Rystad Energy expects that these 9000 wells will be plugged and abandoned over a series of years, but emphasizes that the exact timing is still pending.

“In 2013 and 2014, when oil prices where high, very few operators initiated plans to decommission older assets. Instead, they sought to maximize returns from their producing assets. However, as oil prices dropped to painfully low levels in 2015 and 2016, many of these field life extension plans were deprioritized or scrapped altogether. Although oil prices have recovered to more sustainable levels, the elusive $100 dollar-barrel still seems like a distant dream for most operators. As a result, numerous operators have begun realizing their obligations to decommission elderly uncompetitive assets,” Martinsen remarked.

“In Asia, North America and Latin America, a growing number of fields are currently under evaluation for dismantlement in the face of today’s bearish oil market,” Martinsen said.