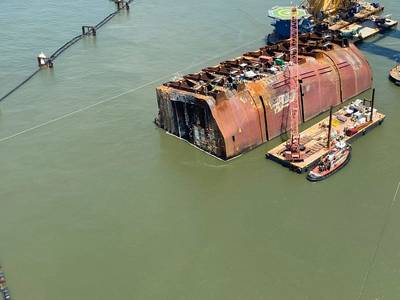 Salvage crews have once again paused operations to remove the Golden Ray wreck outside Georgia's Port of Brunswick, this time for "routine maintenance" on the equipment being used to cut and separate sections of the hulking overturned car carrier.

Considered one of the most complex wreck removals in U.S. history, the project has been plagued by a number of setbacks since salvage operations commenced in 2019. Teams have already encountered delays relating to difficult environmental conditions, a COVID-19 outbreak among crew, mooring system adjustments for the specialized heavy lift crane vessel VB 10,000, a broken cutting chain and a fire inside the wreck.

The most recent pause occurred on Friday after a routine inspection revealed wear on one of the blocks in the cutting apparatus, leading salvors to pause cutting operations to separate Section Three from the remainder of the capsized vessel, the incident command team said.

Meanwhile, welding technicians are pre-staging material on the topside of the Golden Ray and are preparing to make repairs to the side plates of the lifting lugs for Sections Four, Five and Six. The side plates of the lifting lugs deformed due to heat generated from a fire inside the wreck last month. Response engineers will reinspect the lugs using non-destructive testing once the repairs are complete.

The Korean-owned Golden Ray has been aground on its side in the St. Simons Sound outside the nation's second largest car carrier port since it capsized shortly after departing the Port of Brunswick in September 2019.

To date several sections have been separated from the wreck and barged away, but the entire project has progressed at a pace slower than originally anticipated. 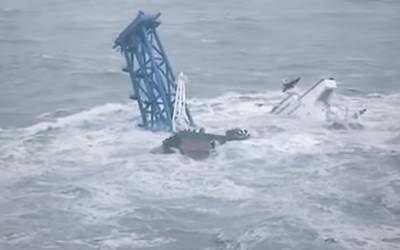