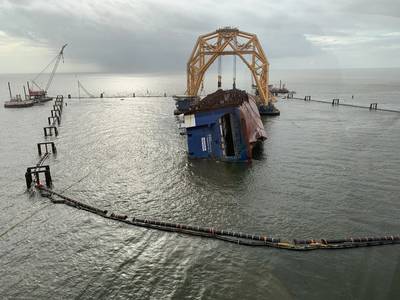 A specialized heavy lift crane vessel began cutting the first bow section of the capsized car carrier Golden Ray on Friday as salvage crews enter the next phase of operations to remove the overturned vessel from Georgia's St. Simons Sound.

The Korean-owned Golden Ray, which capsized after leaving the Port of Brunswick in September 2019, will be dismantled in place and removed in sections. Salvors have installed 16 lifting lugs on the wreck to provide connection points for the U.S.-flagged VB 10,000, which has two 255-foot tall gantries that will use lengths of chain to cut the RoRo vessel into eight pieces and lift them onto barges for transportation to Gibson, La. for recycling. Sections containing cars will be unloaded in a drydock near the wreck site prior to being transported to Louisiana.

The salvage project, one of the largest and most complex in U.S. history, has encountered a number of delays relating to difficult environmental conditions, a COVID-19 outbreak among crew and most recently mooring system adjustments for the VB 10,000.

On Saturday, approximately 25 hours into the cut, crews encountered another minor setback when the cutting chain broke. No injuries or damage to the VB-10000 were reported, and responders were able to retrieve the chain and repair the broken link while also inspecting the chain for any additional fatigue, allowing cutting operations to resume thereafter.

"The cutting process was carefully engineered and modeled, but it remains a highly complex operation," said Deputy Incident Commander Tom Wiker of Gallagher Marine Systems. "This is the first of seven cuts. During each cut we will continue fine-tuning our cutting parameters, including speed and tension of the chain, to improve its efficiency.

"Though the cut is taking longer than expected, we’re gaining valuable knowledge that will guide the rest of this operation." 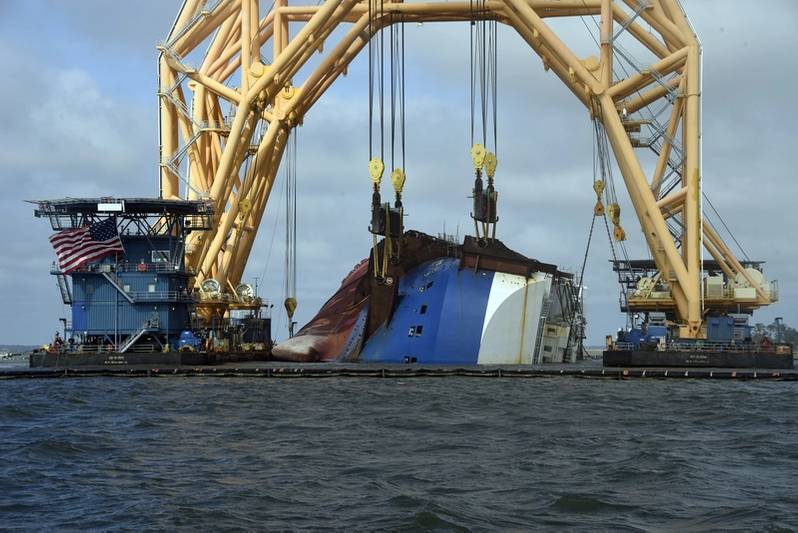 The U.S. flagged VB 10,000 is expected to remain on site for a minimum of eight weeks, plus any extra time required for weather stoppages or other unforeseen circumstances.

The 150-yard safety zone around the Environmental Protection Barrier has  been increased to 200 yards for recreational vessels, and the unified command is advising mariners to steer clear of the perimeter.