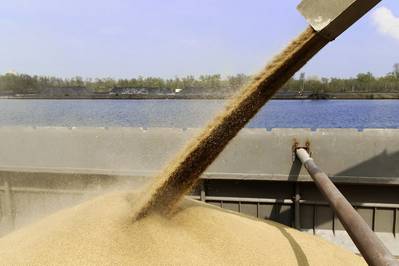 Grain shippers on the U.S. Gulf Coast reported more damage from Hurricane Ida to their terminals on Wednesday as Cargill Inc confirmed damage to a second facility, while power outages across southern Louisiana kept all others shuttered.

Ida, which roared ashore on Sunday, has disrupted grain and soybean shipments from the Gulf Coast, which accounts for about 60% of U.S. exports, at a time when global supplies are tight and demand is strong from China.

Emergency authorities were still surveying the destruction, as numerous barges and boats were sunk in the lower Mississippi River, while other debris has obstructed the navigation channel, the U.S. Coast Guard said.

A portion of the river north of river mile 167.5 near Donaldsonville, La., that was closed by the Coast Guard this week was reopened to vessel traffic on Wednesday afternoon, according to a Coast Guard document seen by Reuters. The notice warned that some hazards such as debris may still exist in the major shipping waterway.

Farther south, a roughly 75-mile stretch remained closed to all vessel traffic due to downed power lines and sunken vessels in the river, according to the Coast Guard and shipping sources.

The Coast Guard will also allow light-draft ships to transit during daylight hours from the Southwest Pass to the south edge of the restricted zone at river mile 105, the notice said.

Mike Strain, commissioner of the Louisiana Department of Agriculture and Forestry, saw scores of barges and at least five ships grounded during a flyover of the river.

“There are still transmission lines in the river, and those need to be removed before there can be safe passage,” Strain said. He said low water levels were making it harder to get stuck ships and barges moving again.

Cargill is still assessing the extent of the damage and does not yet know how soon its grain loading and shipping operations at the busiest U.S. grains port may resume, Cargill spokeswoman April Nelson said.

Rival exporter CHS Inc is diverting its export shipments scheduled through the next month through its Pacific Northwest terminal as the hurricane knocked out a transmission line that powers its lone Gulf Coast facility, the company said.

Other shippers, including Bunge Ltd and Archer-Daniels-Midland Co, are still assessing damage to their locations, although all are still without power, the companies said.

Power may not be restored for weeks.