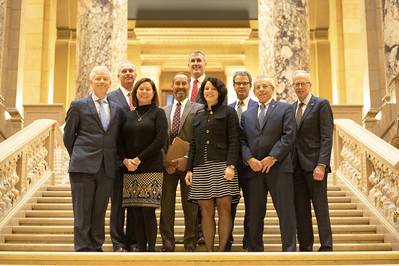 The Great Lakes Seaway Partnership hosted Capitol Day in St. Paul, Minnesota yesterday to meet with Governor Tim Walz and other key legislators to share insights on the critical role of the Great Lakes Seaway system in maintaining a vibrant regional, national and global economy.

“Commercial navigation on the Great Lakes Seaway system is an economic driver — both broadly in the United States and Canada — but, especially, in Minnesota. More cargo moves in-and-out through Minnesota ports than any other Great Lakes state and supports over 6,000 jobs,” said Craig Middlebrook, Deputy Administrator of the U.S. Saint Lawrence Seaway Development Corporation.

Throughout the day, key stakeholders in the Great Lakes-St. Lawrence Seaway system shared the investments they’ve made to promote the future of Great Lakes Seaway shipping.

During their morning meeting with Steve Grove, Department of Employment and Economic Development (DEED), two shipping industry stakeholders shared their investment in the Great Lakes-Seaway system. Fednav Limited, the largest international maritime bulk carrier in Canada, has invested over $500 million in building twenty-two new ships. “The investment we’ve made into building our next generation of ships displays our belief in the system,” said Paul Gourdeau, Senior Vice President of Fednav Limited.

The critical role the Soo Locks has in Great Lakes Seaway shipping was highlighted in this meeting. “Without the Soo Locks, you’d see a truck drive by every thirty seconds if you stood by the road,” said Barker. The ripple effect of a Soo shutdown would cost nearly 11 million jobs and, effectively, shut down automobile production.

These conversations surrounding the critical role the Great Lakes Seaway system has on our economy continued throughout the day of meetings, covering topics on the future of Great Lakes cruising, iron ore production and — as exemplified during the meeting with Governor Tim Walz — workforce development.

“We need to change the perception of the maritime industry,” said Dave Naftzger, Executive Director of Great Lakes and St. Lawrence Governors & Premiers. “Maritime generally has the reputation that it’s old and rusting, but it’s not. It’s actually exciting and high-tech.” The maritime industry offers opportunities for advancement and well-paying jobs to people of various experiences and educational backgrounds.

“We are fully on board; we know what our partnership is. We’re taking the approach of going beyond the individual by building collaboration so that we can strategically partner and create better solutions together,” concluded Governor Tim Walz.