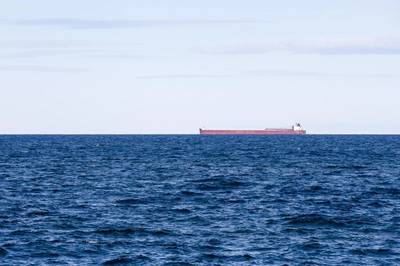 U.S. Great Lakes ports and the St. Lawrence Seaway have experienced a rise in cargo shipments to feed domestic construction and manufacturing activity and global export demand, according to the latest June figures.

The Great Lakes-Seaway System serves a region that includes eight U.S. states and two Canadian provinces, and is seen as a marine highway that extends 2,300 miles from the Atlantic Ocean to the Great Lakes, supporting more than 237,868 jobs and $35 billion in economic activity.

If the region were a country, it is said, it would have the 3rd largest economy in the world with a GDP of $5.5 trillion – larger than that of Japan, Germany, Brazil, or the United Kingdom.

The region is home to 107 million people and accounts for almost 40 percent of the total cross-border trade between the U.S. and Canada.

According to a report released Tuesday, through June 30, total cargo shipped via the binational St. Lawrence Seaway was up 8.37% compared to the same period in 2020; a welcome 12.9 million metric tons (March 22 to June 30).

"The dry bulk category, up 16% through June, is experiencing a strong bounce back and is expected to perform well for the balance of the season due to high demand across the binational Great Lakes-St. Lawrence region for construction materials including cement (up 36%) and gypsum (up 79%)," the report said.

Coke, used in steel and cement production, is up over 125% compared to last year as global commodity price increases have also led to a big increase of coke exports from Superior and Toledo to France, the Netherlands and other European countries. General cargo (up 61%) continues to be driven by steel imports from Europe, feeding manufacturing and construction activity throughout the binational region, the report further said.

Year-to-date iron ore volumes via the St. Lawrence Seaway are also up 14%. Part of that increase is due to Canadian ship operators transporting healthy volumes of iron ore pellets from U.S. Lake Superior ports to the Port of Quebec, where they are transshipped overseas to Asia and Europe.

“This time last year, many of these cargoes had fallen off a cliff due to the pandemic. It’s great to see marine shipping bustling again and supporting the accelerating recovery of so many American industries,” said Bruce Burrows, president and CEO of the Chamber of Marine Commerce, which represents Canadian and American shippers, ports, terminals, and marine service providers, as well as Canadian domestic and international ship owners.

On the western banks of Lake Erie, the Port of Monroe saw many of these trending commodities in June including gypsum, steel and asphalt. The tug and barge Undaunted and Pere Marquette 41 called on the turning basin dock twice to load synthetic gypsum for delivery to Port Colborne, Ontario. McKeil Marine’s motor vessel Harvest Spirit paid a visit to the riverfront dock with a cargo of steel coils. The Paul R. Tregurtha of Interlake Steamship continues calling on the DTE Monroe Power Plant weekly with coal, the report says.

Also, according to the report, more than 2.3 million short tons of iron ore transited the Port of Duluth-Superior in June, the most in a single month since August 2019 and the highest June-only iron ore tonnage total since June 2014. That robust float helped keep the port’s total tonnage 3.5 percent ahead of the five-season average and nearly 40 percent ahead of the 2020 pace through June 30.

“Steel demand remains strong and Minnesota’s Iron Range continues to operate at full production, which is a good thing for the state, the region and for the Port of Duluth-Superior,” said Deb DeLuca, executive director of the Duluth Seaway Port Authority. “The total number of vessel arrivals in our port (243 through June 30) is up nearly 30 percent over last season, which is another positive indicator in what’s been a good shipping season thus far.”

At the Port of Toledo, year to date tonnage was up 25% over the same period in 2020 exceeding 3.7 million tons. Increases in bulk commodity handling have led the way with iron ore shipments up nearly 45% primarily due to the Cleveland Cliffs hot briquetted iron facility going into full production this year. Other bulk products like salt, coal and petcoke were also up during the month of June.

“When we think of exports, Toledo is known mainly for exporting corn and soybeans,”said Joseph Cappel, Vice President of Business Development for the Toledo-Lucas County Port Authority. “This year we are also exporting products to Europe and other locations like distillers dry grains and petcoke. It is always a great opportunity for carriers to have the ability to discharge bulk or general cargo in Toledo and reload with grain or another product that are in demand globally.”

The Port of Cleveland continues year over year growth in tonnage numbers with a strong June. General cargo, which included a mix of containerized cargo, yachts, imported steel, and heavy machinery, grew by nearly 55% compared to June 2020 numbers, and has increased nearly 60% year to date compared to 2020, the report said.

“We will soon be initiating an infrastructure project that will rebuild and modernize two of our most used docks,” said David Gutheil, Chief Commercial Officer, of the Cleveland-Cuyahoga County Port Authority. “This $20 million project will occur in stages over the next 18 months with funds secured through federal, state, and local sources.”

“Our cargo numbers have more than doubled at this facility, which can be attributed to strong demand in the steel sector, and the lengthening and upgrades to our ore tunnel,” added Gutheil. “The result of this project allows the bulk terminal to mix different types of ore on demand upon delivery to the Cleveland Cliffs steel mill."