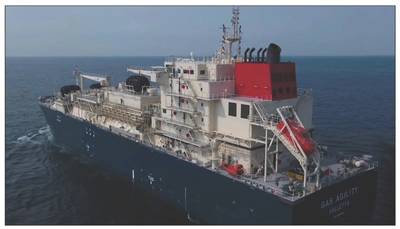 Gas Agility is the world largest LNG bunkering vessel with 18,600 cu. m. MARKIII-flex type membrane tanks built at Hudong-Zhonghua Shipbuilding (Group) Co., Ltd. in China. The vessel is equipped with four sets of 8L20DF engines for electric propulsion and two sets of azimuth thrusters and a bow thruster for navigation. A Harmonized Control system for the thrusters is a key technlolgy for maneuvering safely and efficiently for berthing, unberthing, position-keeping and approach during LNG bunkering.G

A joystick maneuvering system his installed to control the propulsion thrusters which allows the vessel to move by keeping heading and speed even in difficult sea condition, assisting for safe approaches to the jetty and ship side of LNG fuel receiving vessel for ship-to-ship bunkering. The vessel is designed for No Pilot and No Tugboat assistance. So that this ship should have extra flexibility of LNG bunkering, the membrane LNG tanks are designed as no filling/discharging restriction and sub-cooling type re-liquefaction system is extra equipment for controlling tank pressure and LNG liquid temperature. This system consists with LNG chilling system for controlling temperature/pressure of LNG vapor phase with spraying chilled LNG and also control temperature in LNG liquid phase. For safety mooring while ship-to-ship bunkering, mooring tension monitoring system is installed as LNG fuel receiving vessel does not have it, which is integrated in mooring winches.

LNG manifolds are designed as two vertical positions on each side of the vessel, the higher position manifolds with 10-in. is for LNG loading and the lower position manifolds with 8-in. is for LNG bunkering and its capacity is 1,600 cu. m./hr. bunkering rate. As for the ship-to-ship LNG transfer system, an Emergency Release Coupler (ERC) is located onboard and cryogenic flexible hose with Quick Connect and Disconnect Coupler (QCDC) will be led to LNG fuel receiving vessel manifold.

While “Gas Agility” was being built, LNG fueled container vessels were built in the same shipyard, they were the primary LNG receiving vessels Gas Agility is designed for. It made the design of both ships be harmonized ensuring and achieving safe/efficient operation with close communication for design as there was no significant physical distance in the shipyard. Demonstration for alongside and connection with real both ships was taken place at the final stage of construction. 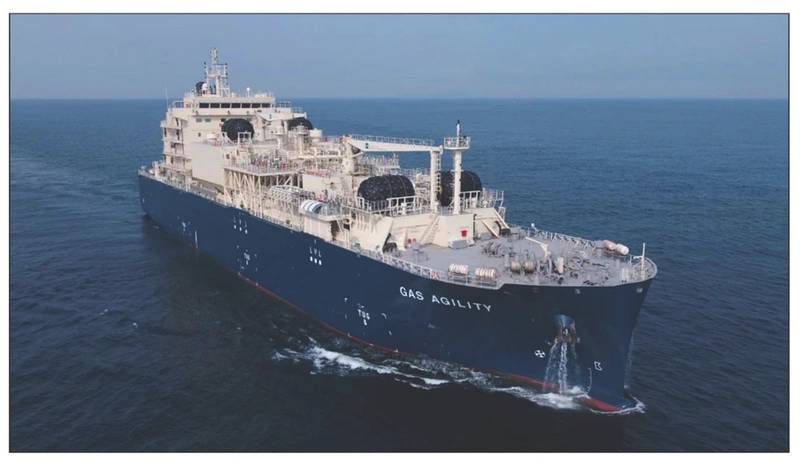