Green Ferry Refit is First of Its Kind in Canada 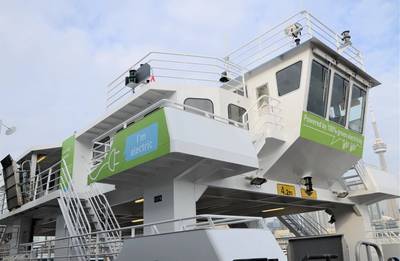 A newly retrofitted electric ferry is the first in Canada to be powered completely by a zero-emissions, lithium-ion power and propulsion system containing no diesel fuel components.

In 2018, PortsToronto issued a request for expression of interest (RFEOI) to reduce air and noise emissions from its 96-foot Marilyn Bell I, used for transporting passengers, vehicles and supplies the very short distance (90-second trips) to and from Billy Bishop Toronto City Airport on Toronto Island.

St. Catharines-based marine electrical engineering firm Canal Marine & Industrial Inc. (CANAL) was successful in proposing a 100% emissions free option, and it went on to deliver the complete electrification retrofit of the formerly diesel ferry, from conception to installation. The vessel, which was converted from diesel to fully electric during a 20-week refit at Toronto Drydock, returned to service in December and is now operating 100% emissions free.

Originally built by Hike Metal Products in Wheatley, Ont., and in operation since 2010, Marilyn Bell I was previously upgraded to run on biodiesel fuel in 2018 before its diesel generators and engines were removed in 2021 to make way for a new electric power and propulsion system and a suite of lithium-ion batteries. The project's naval architect is Quebec-based Concept Naval, and PortsToronto also engaged Nova Scotia-based E.Y.E marine consultants to assist with the implementation. Now fueled by 100% Bullfrog Power renewable sourced energy, the ferry emits zero greenhouse gas (GHG) emissions, reducing the airport's direct GHG emissions by 530 metric tons per year, according to PortsToronto.

The project involved the complete transition of the Marilyn Bell I to CANAL’s ZEROe Power and Propulsion Solution. “In the vessel itself, we replaced the main engines with two 250kw electric induction motors basically mounted in the same location as the original engines,” said Shawn Balding, CANAL’s general manager and project manager for the Marilyn Bell refit, adding that Allied Marine & Industrial assisted with mounting the propulsion motors, alignment of the shafts and fitting of the Vulkan couplings attached to the existing shaft lines. The vessel’s existing azimuthing pod thrusters also remained. 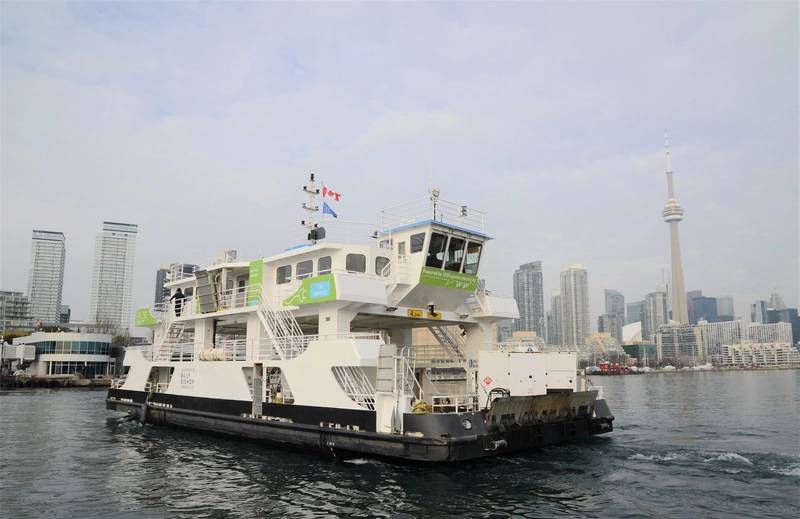 Balding said CANAL designed and manufactured the DC lineups. “It's a split-bus system where we have a separate power and propulsion system for the forward thruster and a separate power propulsion system for the aft thruster,” he explained. “Essentially, each DC lineup, both forward and aft, has on it a grid converter for creating the AC bus to support the ship service loads. It contains the propulsion VSD to operate the propulsion motor. And, it contains two DC-DCs, each connected to separate batteries within a battery string, and the batteries were provided by Corvus and their Orca batteries. There is 113-kilowatt-hours per battery room, and there is a battery room in each of the forward and aft thruster holds.”

Drawing from the retrofitted 226 kWh Corvus Orca Energy ESS, the new power and propulsion system supports the ferry’s existing operations, carrying up to 15 regular-sized vehicles and 200 passengers at a time seven days a week, 19 hours a day, and four round trips (122 meters each way) every hour.

Another key part of the project was the CANAL Automatic Shore Charging System (ASCS), said to be the first automatic charging solution for an electric vessel in North America. The innovative design allows the tower on the dock to be raised and lowered according to the height of the lake, which changes with the ebb and flow of rains and snowmelt, Balding said. Battery charging automatically initiates when connected to the ramp on the mainland side and takes only five minutes during loading to top up the charge. MultiTech produced the tower, and the panto charger is from Stemmann-Technik.

As is the case here in the U.S., vessel electrification technology is a step ahead of Canadian vessel regulations, and Balding said navigating this proved to be a challenge alongside COVID-19 and related supply chain and pricing issues as well as having to switch recognized organizations (RO)—the delegated inspection authority appointed on behalf of Transport Canada— as the project was already in motion. “It's definitely a challenging environment. In the end, though, I would say it went very smoothly,” Balding said.

And while many hybrid- and full-electric vessel newbuild and conversion projects include financial assistance from some government entity, this wasn’t the case for the Marilyn Bell. In total, the ferry conversion cost approximately $3.8 million, paid in full by PortsToronto through the Airport Improvement Fee.

“PortsToronto has made continuous and significant investment to make Billy Bishop Toronto City Airport cleaner, greener and quieter in an effort to create balance between our commercial operations and the surrounding community,” Geoffrey Wilson, PortsToronto CEO, said in a statement. “With the conversion of the Marilyn Bell to electric power we are ticking all of the boxes in our vision for this airport and its operations. In removing all fuel components of the Marilyn Bell and replacing with lithium-ion batteries we will eliminate all GHG emissions related to the operation of the ferry – Clean. We will power these lithium-ion batteries with 100% Bullfrog Power – Green. And we will significantly reduce the noise associated with ferry operations – Quiet.” 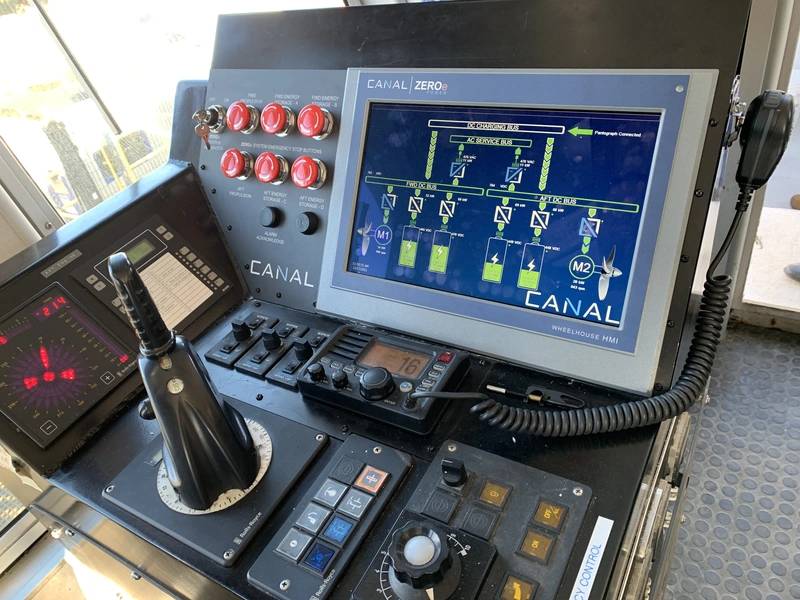 The HMI in the wheelhouse while the vessel is charging (Photo: CANAL)

Increasingly, hybrid- and all-electric propulsion solutions are gaining interest and being put to use in the maritime sector, especially for vessels like ferries and other workboats that operate on fixed routes with frequent and relatively short trips and docking times.

When asked about this trend, Balding said, “I think people have to take the approach that we took here for the Marilyn Bell, which is to look at the system and see if zero emission makes sense. And, what factors into that is how much energy storage you are going to need on board to make the system viable, and what kind of charging time you're going to have.

“The ratio of ramp time to travel time for any route becomes a very significant indicator for the viability of a truly zero-emission route. Fortunately, this one worked out really well to where we were confident that we could deliver a solution that would work without any diesels on board.”

CANAL is soon set to deliver another ZEROe project for Skagit County in Washington State with a newbuild on their Guemes Island route. In comparison to the Marilyn Bell I, this project will deliver over twice the propulsion power, three times the energy storage capacity, and will be equipped with a larger and more powerful Automatic Shore Charging System. The vessel will also have generator on board as a backup. “Because it's operating on the ocean, there's different weather factors that had to be accounted for, and it's a much longer run,” Balding said. “Certainly, availability of the grid becomes a major factor, and they don't have a backup vessel to operate if there was a loss of power to the mainland supply.

“We won this contract in competition against the industry’s top OEMs,” Balding said. “Working with trailblazing organizations like PortsToronto and Skagit County gives us the opportunity to continue adapting and scaling our technology to meet the varying needs of the marine industry.” 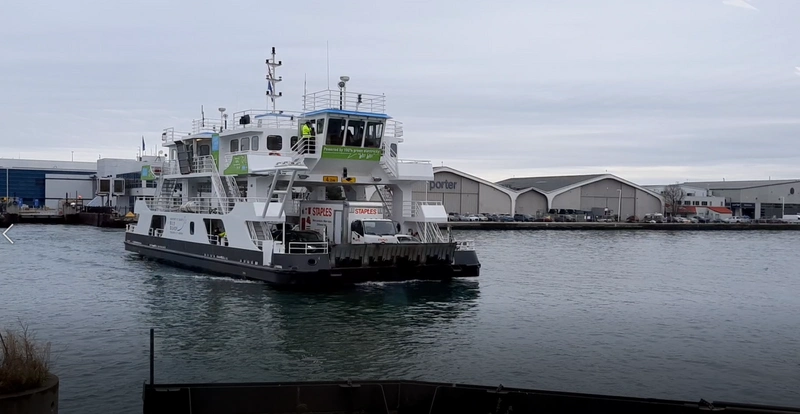 Marilyn Bell I is now operating without emissions. (Photo: CANAL)