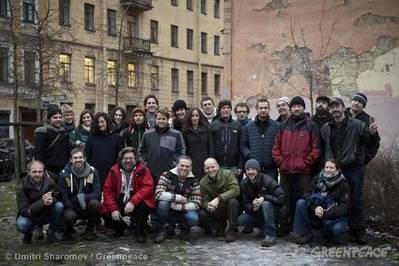 Lawyers for Greenpeace International believe the draft text of a Russian amnesty to be voted on by the Duma (the Russian parliament) would be unlikely to benefit the Arctic 30 protesters. Thus they still face the possibility of trial and conviction for their protest.

In its present form, the proposal would apply only to people who have either been convicted of hooliganism, or people who are on trial and will be convicted within the six month period after the amnesty decree is adopted. Unfortunately, the Arctic 30 fall into neither category, but could be granted amnesty if the text is only slightly amended.

Greenpeace International lawyer Daniel Simons said: “As it stands the amnesty text would not include the Arctic 30, but it very nearly does. The Duma would only have to make a relatively minor amendment to the text and include people charged with hooliganism whose trial has not yet been scheduled. Then the Arctic 30 could go home."

He added: "Right now they still face the possibility of trial and conviction for a crime they didn’t commit, and prison sentences that could stretch to many years. The charges against them should of course be dropped, but if the Arctic 30 case can be brought to an end through the amnesty then that would be a welcome development for people who have already spent two months in jail for standing up for their beliefs."