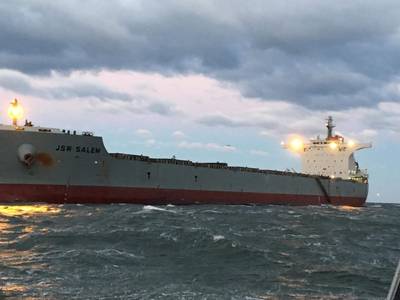 A 958-foot bulk carrier has refloated after running aground about 2.5 miles east of Virginia Beach, Thursday morning.

The ship's crew reported there were 120,000 metric tons of coal and 26 people aboard the ship.

A 45-foot Response Boat-Medium crew from Station Little Creek launched and arrived on scene to assist. An MH-60 Jayhawk helicopter crew from Air Station Elizabeth City, N.C., also launched to conduct an overflight of the scene, the Coast Guard said.

Capt. Kevin Carroll, commander of Sector Hampton Roads, said there were no injuries or pollution reported during this incident.

The JSW Salem was able to refloat with the rising tide, and the RB-M crew escorted the ship to an anchorage about 1 mile off Virginia Beach.

The Coast Guard said it is investigating the cause of the grounding.