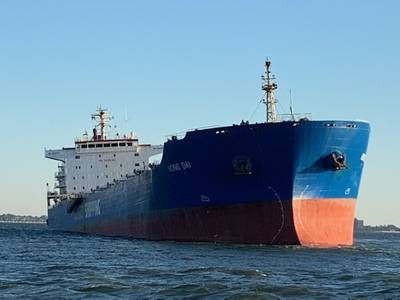 A 738-foot bulk carrier that ran aground near Sewell’s Point in Norfolk, Va. was refloated during high tide on Friday morning, the U.S. Coast Guard said.

It took seven tugs to refloat the Panamanian flagged Hong Dai, which grounded late Wednesday night with 22 crewmembers aboard. The ship was said to be carrying a cargo of coal, as well as 188,000 gallons of low sulfur fuel oil, diesel and lube oil, collectively. No injuries, pollution or flooding concerns were reported.

The refloated ship remains at anchor under a Captain of the Port Order restricting its movement until an underwater survey can be conducted by the company and the vessel is deemed fully safe to sail by the officer in charge of marine inspections.

"The key to this successful marine salvage operation is the coordination of multiple port partners coming together and working for the continued safety, security, and prosperity of the Port of Virginia," said Cmdr. Dean Horton, prevention department head at Sector Virginia.

The 2010-built Hong Dai is operated by COSCO Shipping and arrived at Norfolk anchorage last Friday from Baltimore following a transatlantic voyage from San Ciprian, Spain.