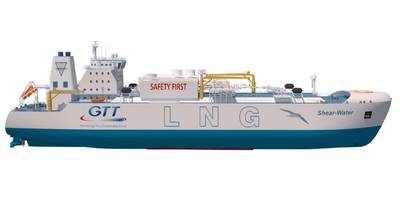 French firm GTT has developed a versatile LNG feeder & bunker vessel concept for worldwide operation without the use of ballast water.

Every day, many ships carry on board a considerable quantity of seawater as ballast over the oceans. Technically, this is needed in empty or partially loaded conditions, in order to maintain seaworthiness, reach sufficient draft for propeller immersion, and avoid excessive bow slamming.

Such ballasting requires investment for the onboard systems and leads to substantial operating costs. In addition, sediments may cumulate at the bottom of the ballast tanks, creating further costs and corrosion problems.

On the environmental side, in addition to the generated emissions, transporting ballast water may transfer harmful aquatic organisms and pathogens when the ballast water is discharged in the arrival port.

The IMO Ballast Water Management Convention is dealing with this major global problem. In most cases today, the compliant solution is the installation of a ballast water treatment system.

However, the cheapest rules-compliance remains not to use any ballast water at all: then, the operator is 100% compliant without any treatment or investment.

Solutions with a so-called V-shape hull are generally proposed. The basic idea is to obtain a somewhat higher draft in the design load case, and by that, also maintain a sufficient draft for safe navigation, even when empty.

This principle can be used as far as a draft limit is not attained. For big deadweight carriers (e.g. Suezmax) it will be impractical.

The GTT concepts take full advantage of the specific membrane geometry: the hull lines and the incorporated membrane tanks are designed to match perfectly well, and free surface effects by the LNG are reduced when the ship is partially loaded.

Over the recent years, GTT has been working in this space with different designers and shipbuilders. 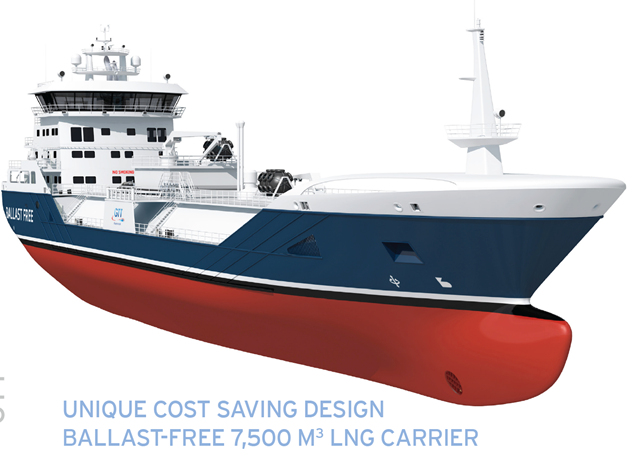 The above image shows a 7 500 m3 single-screw design made in cooperation with FKAB in Sweden. Such a design is well adapted for small-scale distribution in highly sensitive areas such as the Baltic Sea. 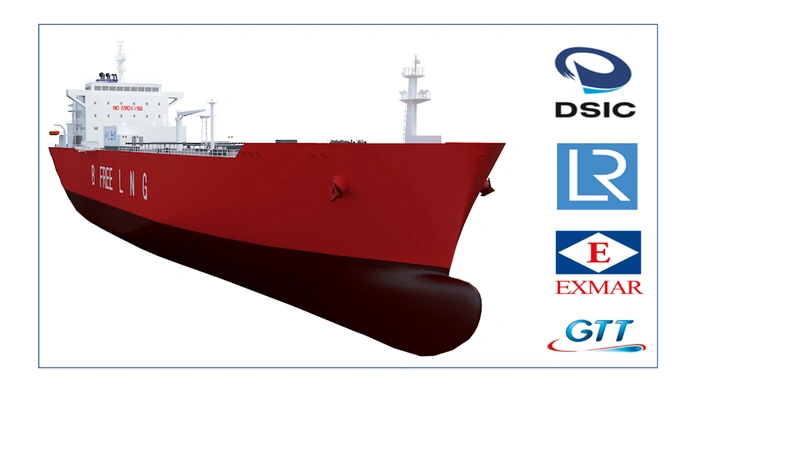 Also, the first batch of seakeeping tests was performed in the SSSRI ship model basin in Shanghai.

The outcome and good results are very promising. An AiP was issued by Lloyd’s Register, confirming the feasibility. 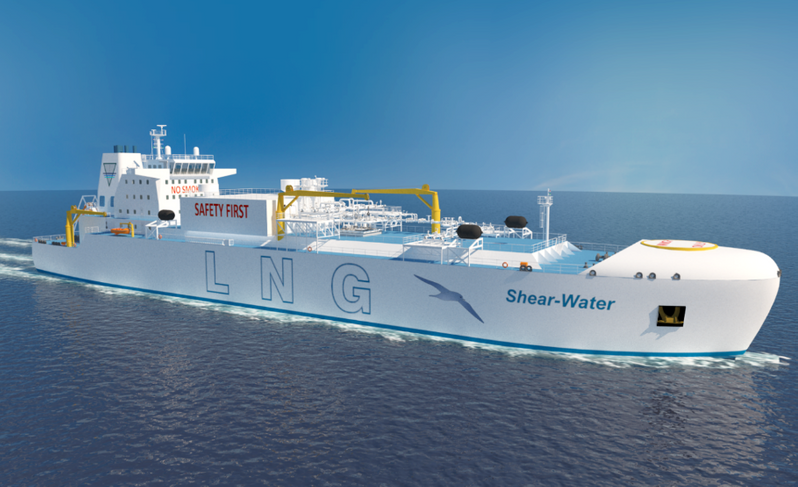 Credit: GTTBuilding on the experience gained on the previous ballast-water-free projects, as well as the recently built membrane-type LNG Bunker vessels, GTT has developed a new concept for a vessel, which may serve either as LNG bunker vessel or as a regional feeder.

Two identical cargo tanks are provided for simplified operations, and a very effective Anti-Roll-Tank is provided in the vessel’s fore part.

Compared with the two previous designs, Shear-Water has a twin-screw azimuth propulsion system, increasing the maneuvering performance and providing a high power reserve in harsh conditions when empty.

Emissions are reduced through lower consumption, on average by a power reduction of over 10% versus a conventional vessel.

Specific issues such as pilot boarding, trim regulation and dry docking were identified, investigated and solutions validated by design. Especially in coastal trades with frequent calls to major rivers, the benefits are substantial.

On behalf of GTT, an extensive test campaign was made by HSVA, The Hamburg Ship Model Basin.  It validated the ship’s behavior in calm-water and the seakeeping in severe sea states. In GTT’s headquarters laboratory, the membrane system was validated for worldwide conditions without any filling restriction. 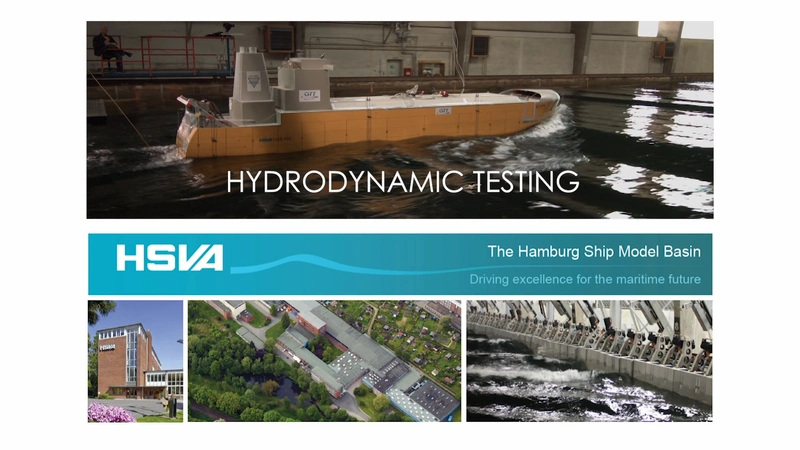 The tests were made with a self-propelled model in a scale of 1:18, a length of 7.75 m, and a laden weight of 2.8 tons.
Classical calm water tests covered speed-power and maneuvering.  The outcome showed a power reduction of 10-15% for the range 10-14 knots when considering average values between fully loaded and empty conditions. All compared with the same size & same function, conventional vessel.
Maneuvering tests showed results exceeding IMO requirements and expectations.

Seakeeping performance was tested in selected sea-states up to NATO Sea-State 7 (Hs 7.5m). No unusual, excessive or dangerous behavior in the selected sea states has been observed. Observations were similar to other ships in such conditions.

Course keeping in waves is considered good, and the ship was never found to be out of control.

Further tests were made for pilot transfer operations. Comparative tests with & without Anti-Roll-Tank (ART) showed a roll reduction of about 60%.

A dedicated full sloshing campaign was made for worldwide conditions. The obtained good results show no filling restrictions for the chosen system Mark III Flex. The foam density is standard 130 and partially 150 kg/m3. The design Boil-Off-Rate with the above values is 0.165%vol./day.

The concept may also be used in other ship types, typical candidates could be tankers, container ships and general cargo vessels.
Key operational questions are addressed and Approvals in Principle were obtained from three major Classification Societies. Full contractual maturity can now be reached in short time.

This is a guest post, and the views and opinions expressed in it are those of the author(s). They do not necessarily reflect the views of MarineLink.