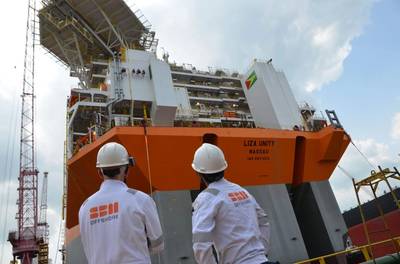 Liza Unity, an under-construction FPSO that will be Guyana's second offshore facility in production, remains on schedule for first oil in 2022, Hess Corp. said Thursday.

Hess, a partner in the ExxonMobil-operated Stabroek block the Liza Destiny is operating, said Thursday that Liza Destiny would reach full capacity of 120,000 gross bopd in June. Hess also said that Exxon has temporarily idled two of the four drilling rigs on the Stabroek Block due to pandemic-related travel restrictions.

As for the second phase of the Liza field which will be developed via a much larger FPSO – the SBM Offshore-supplied Liza Unity - Hess said it remained on target to achieve first oil in 2022. The Liza Unity will have a 220,000 bopd per day capacity. The China-built FPSO hull recently arrived in Singapore for topside integration.

SBM Offshore, the company that has been tasked with delivering the Liza Unity FPSO, last month said some delays in project execution would be unavoidable due to the Covid-19 lockdowns, but that the company was in close contact with clients and business partners to manage the situation, adjust execution planning and where appropriate create mitigation plans.

SBM Offshore will provide its trading update on May 14, 2020, when more info might be disclosed when it comes to the FPSO construction schedule.

When it comes to the Payara offshore oil field - Guyana's third planned development - also in the Stabroek block - the partners have recently delayed works on the project.

Payara, with an expected production capacity of up to 220,000 gross bopd, might see a potential delay in the first production of six to twelve months beyond the initial start-up target in 2023, Hess said Thursday.