The Port of Halifax Becomes a Member of HHM 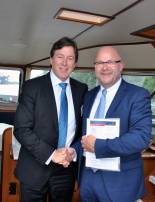 Photo courtesy of Port of Hamburg

Geoffrey Machum, Chairman of the Halifax Port Authority, and Axel Mattern, Executive Board Member of Port of Hamburg Marketing, signed the membership agreement in the course of an official visit to the port by a delegation headed by Stephen McNeil, Premier of the Canadian Province of Nova Scotia. The port round trip organized by HHM for representatives of business and politics as well as the Canadian Embassy culminated with a tour of HHLA’s Container Terminal Altenwerder (CTA) and offered a fine occasion for forging and deepening business contacts.

“For Halifax, which can be reached from Hamburg by ship in just six days, our membership with Port of Hamburg Marketing opens up excellent new  opportunities for building up contacts with member companies and firms in the export and import fields based in the Hamburg Metropolitan Region or further inland. For us, Port of Hamburg Marketing is an ideal marketing platform,” explained Geoffrey Machum.

“We are delighted that with the Port of Halifax, we have been able to gain a first member in North America, and against the background of increasing Transatlantic trade between Northern Europe and North America, we see a large number of points of reference for joint marketing activities with our new member. Both sides will profit here from targeted networking at events and trade fair participations in markets of importance for both of these port and logistics hubs,” stressed Axel Mattern.

Over the next few years significant major project investments are planned for Atlantic Canada. The Atlantic Provinces Economic Council have forecasted the value of major projects in the region at $122 billion. “With Halifax as a gateway for supplies and logistics for industry and construction projects in the region, we are setting the course for more jobs and growth,” said Stephen McNeil.  “I see the expansion of relations between the ports of Halifax and Hamburg as a valuable facilitator for these projects.”

Sailing weekly from Hamburg and transporting wheeled cargo and vehicles in addition to containerized cargo, ACL’s Transatlantic ConRo Service calls at Halifax. In 2013 8.6 million tons of cargo, including 442,000 TEU (20-ft standard containers), were discharged and loaded at handling terminals in Halifax. Apart from containerized general cargoes, Halifax specializes particularly in break-bulk and project, as well as bulk, cargoes. On cruise business, in 2013 Halifax handled altogether 252,000 cruise passengers, with 134 calls by cruise ships.

For 2013, the Port of Hamburg reported total seaborne cargo throughput with Canadian ports of 4.34 million tons, representing a 12.3 percent increase over 2012. Five shipping lines transport containerized and multi-purpose cargoes and vehicles on liner services between Hamburg and Canadian ports. Among exports, machinery, chemical products and automotive parts, especially, make the Atlantic crossing via Hamburg to Canada. On the imports side, iron ore, coals and agricultural produce dominate the cargoes handled in Germany’s largest universal port.