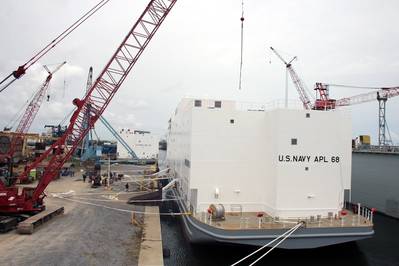 Over the course of several days, Halter Marine Inc. celebrated multiple milestones on the Auxiliary Personnel Lighter–Small (APL(S)) program. The Pascagoula, Miss. shipbuilder launched the first two berthing barges, erected modules on the third barge and laid the keel on the fourth barge.

In September 2018, the company received the initial contract to design and build two units, with options for four additional units. The company expects to deliver the first two APLs this fall, while the third vessel is due to be delivered in the first quarter of 2021. Construction on the fourth vessel is expected to be complete in the summer of 2021.

“It’s been an exciting and busy time in our shipyard this week,” said Bob Merchent, recently appointed president and CEO of Halter Marine, a company of ST Engineering North America. “We safely and successfully launched two barges and reached significant milestones on the third and fourth barges. The launches were carefully orchestrated to ensure a safe transition from dockside to our dry dock. I am proud of the dedication of the women and men at Halter Marine for their outstanding work.”

Each APL launch took place over a two-day period, with meticulous planning and execution from the shipyard onto the dry dock. Both vessels are now moored pier-side as interior work continues.

“In May, we cut the first plate of steel on the fourth APL and successfully laid its keel four weeks later,” said Kevin Amis, Executive Vice President of Operations. “My team worked closely with the U.S. Navy Supervisor of Shipbuilding, Signet, the harbor pilots and our sister company, ST Engineering Halter Marine and Offshore to plan to execute successful back-to-back dry dock launches along with the keel laying ceremony and adding modules to APL No. 3. It’s been a very good and safe week here at Halter Marine.”

The initial contract was for the detail design and construction of the first and second APL with an option for four additional vessels. Construction of all APLs is firm, fixed-price. Should the Navy exercise all of the options with associated supplies and services, the total contract award would be in excess of $244 million.

APLs–also referred to as berthing barges–are used by the Navy to house crewmembers when ships are in port for availabilities and Inter-Deployment Training Cycles. The barges are mobile and can be towed to new bases or shipyards to support changing fleet requirements and also offer potential use for humanitarian missions and other temporary assignments.

The vessels are 82 meters long x 20.95 meters wide x 2.2 meters draft. Additionally, they are capable of seating 228 enlisted personnel and 56 officers for each meal. Each vessel is equipped with offices, classrooms, washrooms, laundry facilities, medical treatment areas, barber shop and fitness center. The vessels are being fitted with mixed gender berthing spaces for 74 officers and 537 enlisted personnel, for a total of 611 people.