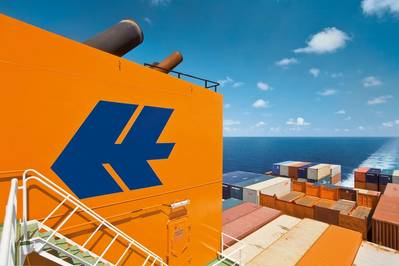 FY operating profit down 66 pct and freight rates down 15.4 percent in 2016. Company says merger benefits, cost cuts help.
German container shipping firm Hapag-Lloyd on Tuesday reported a 66 percent year-on-year fall in operating profit for 2016, blaming mainly significantly lower freight rates.
Operating profit came to 126 million euros ($133.5 million), while earnings before interest, tax, depreciation and amortisation (EBITDA) were down 27 percent at 607 million, it said in a statement.
But it said transport volumes rose by 2.7 percent to 7.6 million twenty-foot equivalent units (TEU) and that lower bunker prices - the cost of ship fuel, which is tied to crude oil - and ongoing synergies from its merger with Chilean peer CSAV as well as cost savings increased efficiency.
Global container shipping is suffering its worst downturn due to weaker demand in a faltering global economy and an excess of ships. Freight rates fell 15.4 percent in 2016 to an average $1,036 per TEU, Hapag-Lloyd said.
The sector's slump has prompted a series of mergers and alliances aimed at saving costs and pooling ships and routes. Hapag-Lloyd aims to close by the end of the first quarter a deal with its peer United Arab Shipping company (UASC) to create the world's fifth-largest line.
It signed binding agreements for the 7 to 8 billion euro transaction last summer, but the deal has been taking longer than expected to close due to financing issues blamed on the industry downturn, according to sources.
Tough conditions have led many banks to cut lending to the industry. However, Hapag-Lloyd placed two bonds in recent months, with volumes of 200 million and 250 million euros, partly for the early redemption of existing notes.
Hapag-Lloyd is due to report a 2016 net profit figure and guidance for 2017 when it publishes full annual results on March 24.