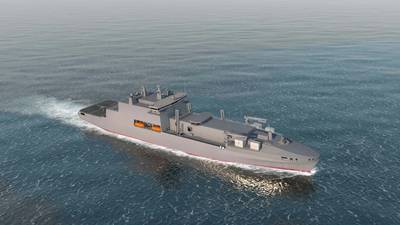 Britain has selected a Harland & Wolff-led consortium to build three Royal Navy support ships under a 1.6 billion pound ($1.9 billion) contract that will create 1,200 jobs in UK shipyards, including in Belfast where final assembly will take place.

The consortium, which comprises ship designer BMT, Harland & Wolff and Navantia UK, was appointed preferred bidder to deliver the three support vessels that will provide munitions, stores and provisions to the Royal Fleet Auxiliary's aircraft carriers, destroyers and frigates, the government said on Wednesday.

The consortium's proposal included a 77 million pound investment into UK shipyards and aims to deliver an additional 800 jobs in the supply chain.

"Building on ambitions laid out in the National Shipbuilding Strategy, this contract will bolster technology transfer and key skills from a world-renowned shipbuilder, crucial in the modernisation of British shipyards," Defence Secretary Ben Wallace said in a statement.

The vessels - each the length of two Premier League football pitches - will be the second longest military ships after the two Queen Elizabeth-class aircraft carriers.

Production will start in 2025, with all three ships expected to be operational from 2032, the government said.