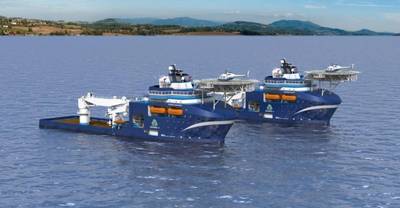 Holvik has been brought on board to enhance the marketing capabilities of Harvey Gulf International Marine, Harvey Gulf Subsea Solutions, Harvey Fuel, and its Offshore Windfarm Vessel Support division.

He is of Norwegian descent and spent most of his career with Kongsberg Maritime. He started with Kongsberg in his homeland of Norway, eventually moving to the United States in 1998.

From there, he worked his way up to President of Kongsberg’s North American division in Houston, Texas. Jon holds a Bachelor of Science Degree in Electronic/Electrical Engineering Data Technology, received from Kongsberg g Tekniske Fogskole (Technical College) in Kongsberg, Norway.

He most recently held the role of Sales and Business Development Manager, at Siemens Energy.

In his new role with Harvey Gulf, one of Holvik’s responsibilities will be the marketing of Harvey Gulf’s LNG-Powered Offshore Supply Vessels, which are now also being enhanced with further emission and energy savings with the addition of onboard battery systems.

"From Mr. Holvik’s experience with Siemens Energy, he brings a wealth of expertise and deep knowledge of the Offshore Windfarm Industry, in which Harvey Gulf is actively pursuing SOVs, CTVs, and the WTIV business," Harvey Gulf said.

Holvik will also be marketing Harvey Gulf’s new 2 Million Gallon Diesel Fuel Facility at its shore base in Fourchon, along with one of its supply vessels that can now deliver 800,000 gallons of fuel offshore.