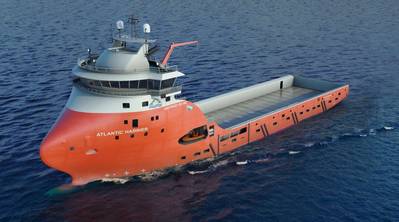 Norwegian offshore vessel builder Havyard will outsource the construction of the Atlantic Harrier platform supply vessel to its compatriot yard Kleven, as delays with other projects have put a strain on Havyard’s Leirvik facility.

The platform supplier was first ordered by Fafnir Offshore in 2014, but Havyard in 2017 canceled the order as Fafnir was unable to secure a long-term charter or financing agreement.

Havyard then last year won a contract to deliver the PSV to Canadian-based Atlantic Towing, with delivery scheduled for April 2020.

However, Havyard on Friday said it would outsource the completion of the vessel to Kleven Verft, with delivery to the client now scheduled for summer 2020.

Havyard said: "Delays to earlier building projects at the yard in Leirvik have had a ripple effect on the completion of the remaining order book, leading to a need to relieve the workload at the Leirvik facility.

The shipbuilder said that the outsourcing to Kleven will ensure completion of build “no 126” as the vessel is labeled – and other ongoing projects.
The agreement with Kleven is split into two parts, and the first part of the planning and the pre-project has already begun.

The final contract for the second part of the agreement is expected to be finalized in a few weeks when the preliminary project is complete.

"The contract is part of the main project towards completion of Havyard’s remaining order book, which comprises seven newbuilds in all (phase 2)," Havyard said.

Kjetil Bollestad, CEO of Kleven Verft said: "This is an important assignment for us, as we can utilize the capacity at the yard in a good way until delivery. PSV is a product [in] which all employees at Kleven have a high level of expertise, and we look forward to [working] with an offshore ship again."

The vessel that Kleven Verft - which recently agreed to be bought by Croatian company DIV - will complete for Havyard is an energy-efficient PSV with large cargo capacity, 1000 square meters of working deck and interior for 54 persons.

The 89.7-meter offshore vessel will get ice-class ICE-1B for operation in cold water, and a 650-kW battery pack will ensure low diesel consumption.