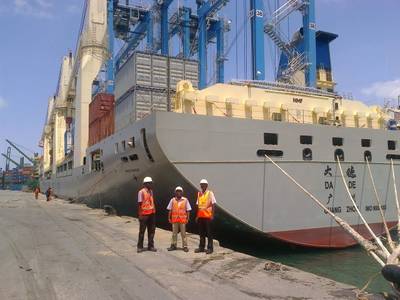 Inchcape Shipping Services (ISS) announced it has completed another complex heavy-lift project in Africa, this time at the Port of Mombasa in Kenya.

ISS was appointed as port and discharging agents for the COSCO-owned MV DADE, which arrived at the port in September 2014 with seven RTG cranes on-board. The cranes which were commissioned by the Kenya Ports Authority represent the first stage of the upgrade and expansion plans which will enable the port to develop its cargo processing and logistics activities at the container terminal facilities in the Port of Mombasa.

The discharge operation was a careful and methodical process, completed under the watch of Bwanaheri Lali, ISS’ Port Operations Manager in Mombasa and Port Captain He Wen Xua of COSCO China. Due to the Port’s heavy-lift and daylight operating restrictions, the discharge took a full three days to complete. COSCO has confirmed a further five RTGs will be delivered on the MV Da Qing Xia in early November.

ISS Kenya General Manager, Kevin Chaney, said, “Inchcape Shipping Services is playing an ever-increasing role in the port infrastructure developments happening on the East Coast of Africa, having recently handled a number of similar heavy-lift operations, and has firmly established itself as the market-leader in this type of project in the region.”