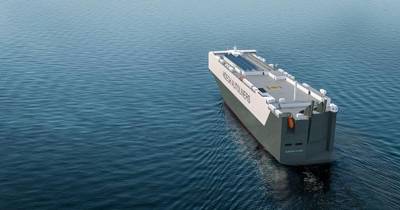 Höegh Autoliners announced it has signed a contract to build an additional four new multi-fuel and zero-carbon ready Aurora class vessels on the same terms and specifications as the first four vessels.

Höegh Autoliners said its intention is to finance the vessels by a combination of equity and debt, and noted that it is exploring several sources for credit and expect to conclude the financing well ahead of the delivery of the vessels.

This will extend Höegh Autoliners’ Aurora class newbuilding program to eight vessels, all of which will be built by China Merchants Heavy Industry (Jiangsu) Co., Ltd. (CMHI), with an existing option for another four vessels (ships 9-12).

The first in the pure car and truck carrier (PCTC) segment able to operate on zero carbon fuels, the Aurora vessels will have DNV’s ammonia and methanol ready notation, with main engine provided by MAN. Together with the capacity to carry up to 9,100 cars, the Aurora class will be the world’s largest and most environmentally friendly car carrier, Höegh Autoliners said. Bridge system will be supplied by Kongsberg.

Höegh Autoliners said it also reached an agreement with CMHI that allows it to accelerate its green fleet renewal program from 12 to 16 Aurora vessels. The additional four vessels will be in the form of slot reservations on market terms until end of December 2022 and a first right of refusal on four slots until the end of July 2023. Höegh Autoliners retains its existing option on vessel 9-12 until end July 2023 and vessel 13-16 would be for 2026 and 2027 delivery, should the company pursue this acceleration opportunity.

Andreas Enger, CEO of Höegh Autoliners, said, “We want to be the preferred green partner in deep sea shipping, and this is yet another concrete and decisive step on our path to zero. We are committed to building a more sustainable maritime industry in close collaboration with our partners and customers. Exercising the option demonstrates Höegh Autoliners’ commitment to the company’s green fleet renewal strategy and reiterates its confidence in future fuel opportunities.”

Höegh Autoliners expects delivery of two Aurora vessels every six months starting from the second half of 2024.