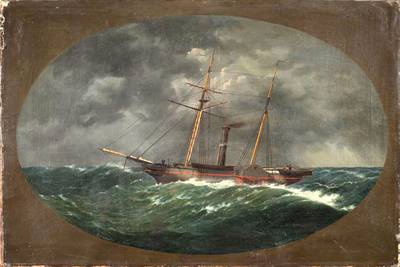 An 1852 painting of the Robert J. Walker by W.A. K. Martin. Courtesy of The Mariners' Museum

NOAA announced that the wreck of the ship USCS Robert J. Walker, a steamer that served in the U.S. Coast Survey, a predecessor agency of NOAA’s Office of Coast Survey, has been added to the National Register of Historic Places.

The Walker served as survey ship, charting the Gulf Coast ‒ including Mobile Bay and the Florida Keys ‒ in the decade before the Civil War. It also conducted early work plotting the movement of the Gulf Stream along the Atlantic Coast.

Twenty-one men died when Walker sank in rough seas in the early morning hours of June 21, 1860, 10 miles off Absecon Inlet on the New Jersey coast. The crew had finished its latest surveys in the Gulf of Mexico and was sailing to New York when the Walker was hit by a commercial schooner off New Jersey. The side-wheel steamer, carrying 66 crewmembers, sank within 30 minutes. The sinking was the largest single loss of life in the history of NOAA or its predecessor agencies.

“Robert J. Walker is a rare and unique reminder of the pioneering work of the U.S. Coast Survey,” said James Delgado, director of maritime heritage for NOAA’s Office of National Marine Sanctuaries. “The crew of Walker, working from this vessel helped survey and open ports vital to commerce and the national economy before the Civil War. The National Register listing highlights that role as well as the fact that Walker is now the grave of many of its crew, which is why we sought this designation.”

Built in 1847, the Walker was one of the U.S. government’s first iron-hulled steamers, and was intended for the U.S. Revenue Service, the predecessor of the United States Coast Guard. Instead, the Walker and some of its sister steamers were sent to the U.S. Coast Survey, established by President Thomas Jefferson in 1807 to survey the coast and produce the nation’s nautical charts.

Last year, NOAA and its partners confirmed the Walker’s location and identity as part of a private-public collaboration that included research provided by New Jersey wreck divers and government and university maritime archaeologists. NOAA does not plan to make the wreck a sanctuary or limit diving, but to work with New Jersey’s wreck diving community to better understand the wreck and the stories it can tell.

At least 71 people died when the migrant boat they were aboard sank off the Syrian coast after sailing from Lebanon earlier this week, the Lebanese transport minister said…