This Day In Naval History: March 10 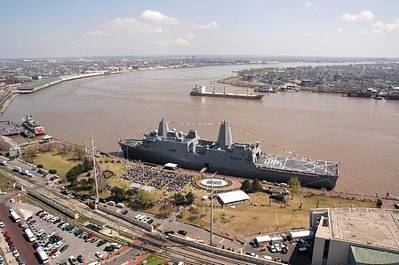 1783 - The last naval action of the American Revolution takes place when the Continental frigate Alliance, commanded by Capt. John Barry, battles HMS Sybil south of Cape Canaveral, Fla. Sybil is damaged in the fight and returns to the two warships that did not join in the battle.

1933 - The Pacific Fleet provides assistance after an earthquake at Long Beach, Calif.

1945 - The Navy and civilian nurses interned at Los Banos, Philippines as prisoners of war since early January 1942 are flown back to U.S. The Navy nurses are later awarded the Bronze Star for their time in captivity.

1948 - The carrier suitability of the FJ-1 Fury jet fighter is tested aboard USS Boxer (CV 21) off San Diego, with a number of landings and takeoffs.

2001 - USS Winston S. Churchill (DDG 81) is commissioned at Naval Station Norfolk. The 31st destroyer of the Arleigh Burke-class is the fourth U.S. Navy warship to be named after a British citizen. Churchill has a Royal Naval officer assigned permanently to the ship and she flies the Royal Navys White Ensign as well as the Stars and Stripes.