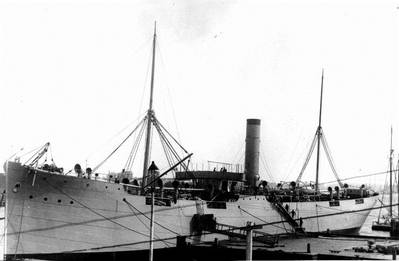 USS Merrimac at the Norfolk Navy Yard, Portsmouth, Virginia in 1891 (Photograph from the Bureau of Ships Collection in the U.S. National Archives)

1785 - Order to sell last ship remaining in Continental Navy, frigate Alliance . No other Navy were ships authorized until 1794.

1898 - Collier Merrimac sunk in channel leading to Santiago, Cuba in unsuccessful attempt to trap Spanish fleet. The crew was captured and later received the Medal of Honor.

1949 - Wesley A. Brown becomes the first African-American to graduate from the U.S. Naval Academy.