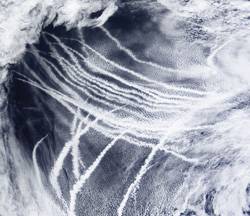 Ship Tracks South of , a satellite image acquired by NASA on March 4, 2009.

On March 4, 2009, the skies over the northeast were streaked with clouds that form around the particles in ship exhaust. This pair of images shows how these ship tracks are different from the natural marine clouds in the same area. The top image is a natural-color (photo-like) view of the ship tracks. The image below reveals more information than a picture: it shows the size of the cloud droplets. Both images are based on observations made by the Moderate Resolution Imaging Spectroradiometer (MODIS) on NASA’s Terra satellite. In the natural-color view of the clouds, the ship tracks are noticeably brighter. What makes one cloud brighter than another? The bottom image reveals one of the important influences on brightness: the size (radius) of the droplets in the cloud. The ship tracks are brighter than the regular clouds because the cloud particles in them are smaller (yellow and peach), but more numerous, than the particles in the natural clouds (lavender to dark purple). The two types of clouds may actually contain the same volume of water, but when the water gets spread out over many, many small droplets, the total reflective surface area increases. (Said another way, as you make a sphere smaller and smaller, the volume decreases faster than the surface area). More light is reflected back to the satellite, and the cloud looks brighter. Clouds form when water vapor condenses (or freezes) onto a small particle, like a speck of dust or a salt crystal. The bigger the “seed,” the bigger the cloud droplet. The particles in ship exhaust are even tinier than natural sea salt particles, so the clouds that form in the wakes of ships have smaller droplets. A cloud’s brightness impacts how much sunlight gets bounced back to space and how much reaches the surface of the Earth, which influences global climate. The size of the particles also influences the amount of rain the clouds produce; smaller droplets are less likely to collide and form drops that are big enough to fall as rain.

NASA images by Robert Simmon and Jesse Allen, based on an image by Jeff Schmaltz, MODIS Rapid Response Team. Caption by Rebecca Lindsey.

Air emissions from ships has been an issue since at least 1960, when the United States Supreme Court ruled that the city of Detroit, Mich., could prosecute the owner of a vessel engaged in interstate commerce for violation of a local smoke abatement ordinance.  More recently, the state of imposed visible smoke emission restrictions on cruise ships calling in southeast ports and the state of is imposing shore power (cold ironing) requirements on certain ships calling at certain ports in the state.

On the international front, after years of negotiation, the International Maritime Organization (IMO) adopted a Protocol to its International Convention on the Prevention of Pollution from Ships (MARPOL Convention) to regulate certain air emissions from large ships engaged in international commerce.  This Annex VI to the MARPOL Convention came into force for contracting party nations on May 19, 2005.  After significant debate and controversy in this country, the U.S. Senate gave its advice and consent to adoption of Annex VI and legislation was enacted to implement its provisions.  Annex VI came into effect for the on January 8, 2009.

For the , enforcement of Annex VI is divided between the U.S. Coast Guard and the Environmental Protection Agency (EPA).  Only the EPA may issue Engine International Air Pollution Prevention (EIAPP) certificates to vessels of the . Only the Coast Guard may conduct random inspections of a ship (domestic or foreign) to verify compliance with Annex VI.  The EPA may conduct a ship inspection when requested by the Coast Guard or when other information indicates that a violation has occurred.  The EPA may, though, directly enforce requirements relating to shoreside reception facilities and to shoreside violations fuel oil quality requirements.  With the exception of issuance of the EIAPP certificates, the Coast Guard has broad authority to enforce Annex VI and the implementing statute.  Neither agency, though, has promulgated implementing regulations.

The shared USCG/EPA jurisdiction relates to the vast majority of the substantive requirements of Annex VI.  Restrictions are placed on use of ozone depleting substances, such as halons.  Emissions of nitrogen oxides (NOx) by diesel engines with a power output of more than 130 kW installed (or which undergo a major conversion) on or after  January 1, 2000 are regulated by means of a detailed NOx Technical Code. Emissions of sulfur oxides (SOx) are controlled by placing universal and area restrictions on amount of sulfur contained in fuel oil. Emissions of volatile organic compounds (VOCs) from tankers may be regulated at the option of each country that is party to Annex VI by means of requiring use of vapor control systems on such tankers and the terminals with which they transfer cargoes.  Shipboard incinerators must be approved and operated in accordance with specific requirements.  Governments of nations party to Annex VI undertake to ensure the provision of facilities adequate to meet the needs of ships calling at their ports for purposes of compliance with the ozone-depleting substances and exhaust gas cleaning system requirements of the Annex.  Those governments also undertake to ensure that fuel oil supplied in their ports meet the requirements of the Annex.  Certain air emission restrictions also apply to platforms and drilling rigs operating above the seabed of nations party to Annex VI.

The U.S. Coast Guard has, on an interim basis, issued guidance explaining its enforcement policy pending promulgation of binding regulations.  The guidance establishes foreign-flag ship examination procedures to USCG port state control personnel.  It provides that compliance verification should primarily focus on documentation, equipment certification/approval, and cursory materiel tests/evaluation.  A vessel of 400 gross tons or more must have a valid International Air Pollution Prevention (IAPP) certificate or, if from a nation not party to Annex VI, a statement of voluntary compliance.  For each diesel engine covered by Annex VI, there must be a valid IEAPP certificate.  Random spot checks are to be conducted of: (1) the Record Book of Engine Parameters; (2) bunker delivery notes; (3) fuel samples; (4) documentation for exhaust gas cleaning systems (if fitted); (5) incinerator certification; (6) refrigeration equipment; (7) vapor emission control system (if fitted); and (8) reports of bunker delivery non-compliances (if any).  A walk-through examination is to be done to form a general impression of the state of the engine room, machinery spaces, and the physical conditions of systems, equipment, and components.

For vessels of the United States that are subject to Annex VI, the inspections are more detailed, as is to be expected.

Suggestions have already been made that the United States apply to the IMO for the establishment of Sulfur Emission Control Area (SECA) determinations for various portions of the coast.  One should expect submission of one or more applications (probably commencing with the coasts of , , and ) to be made shortly.  Ships within a SECA (recently renamed as Emission Control Areas - ECAs) may only use diesel fuel with a maximum sulphur content of 1.5%.

Ship owners and operators have barely caught their breath after this deluge of regulation into a previously little-regulated area, but more is on the horizon.

While the government seems fully committed to using the international scheme to regulate air emissions from ships engaged in international trade, the same cannot be said to the individual states, particularly .  The state of continues to pursue, to date unsuccessfully, authority to regulate air emissions from ships in international waters off the coast of the state.  It has been more successful with its requirements for cold ironing of ships moored in its ports.  One should expect this latter program to spread to other states.  It is hoped that a universal standard for the shore-ties can be established so as to make this process more efficient.  It also would not be surprising if efforts were made to designate all coastal waters as an ECA.  The saving grace is that the will be enforcing the international standard, not some unique requirements of its own.  As with many other programs, though, owners and operators should expect that enforcement of these requirements by the federal government will be more vigorous than that experienced in other nations.

The next air emissions issue facing the shipping industry may prove even more difficult to resolve - greenhouse gas (GHG).  The major GHG for which control measures are being developed in carbon dioxide, which is a natural byproduct of combustion.  The engineering solutions applicable to land-based sources have, to date, been complex and expensive.  That will be even more so when applied to the wide variety of ships currently in operation.  The airline industry operates a finite number of different aircraft under fairly uniform conditions.  Such is not the case in the maritime industry.  In addition to the engineering issues, there are complex issues to be resolved before a regulatory regime can be agreed upon and implemented.  The European Union is considering adoption of a regional regime involving cap-and-trade.  It is unclear how this scheme would work with regard to vessels that operate in EU waters only part of the time.  After securing a victory for uniformity with respect to air emissions generally, the maritime industry is facing the prospect of Balkanization as regards regulation of GHG.  The IMO is working hard to head-off the EU efforts by developing its own GHG scheme.  We should vigorously support the IMO in this endeavor.

(From the April 2009 Edition of Maritime Reporter & Engineering News)