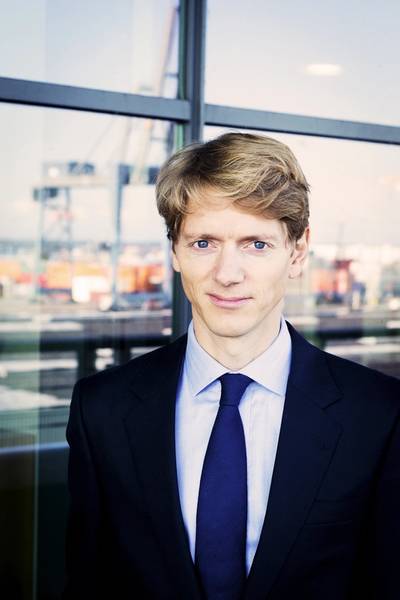 The grandson of Maersk Mc-Kinney Moller, who transformed A.P. Moller-Maersk into an international conglomerate, was on Monday appointed chief executive of the holding company behind the Danish shipping giant.

The move sends a signal that the Maersk family will remain an active owner of the listed company, but it also distances the heir from daily operations, analysts said.

Robert Maersk Uggla, 38, who has been CEO of Maersk-owned tug boat operator Svitzer since 2012, will take on the position as CEO of A.P. Moller Holding on Sept. 1., the company said.

Robert Maersk Uggla will replace Martin Gottlob who will continue to work at A.P. Moller Holding in a new role.

"This means the family foundation will remain a strategic owner with a relatively high influence on the direction of the company, compared to other foundations," Alm. Brand Bank analyst Michael Friis Jorgensen said.

A.P. Moller Holding, wholly-owned by a fund established in 1953 by the founder of A.P. Moller Maersk, owns 41.5 percent of shares and 51 percent of voting rights in the listed company A.P. Moller-Maersk A/S.|

Analysts said it was difficult to predict whether Robert Maersk Uggla's appointment would lead to any changes in the listed company's operations.

"There's no doubt he's done a good job in Svitzer, and he is somehow being moved up in the hierarchy or at least towards the more general decision-making layer, where it's more about the entire group's business-umbrella looking forward," Sydbank analyst Morten Imsgard said.

Uggla joined the company in 2004 and has been a member of the board of A.P. Moller-Maersk A/S since March 2014.

Analysts said the appointment did not point to Uggla as the obvious successor to Nils Smedegaard Andersen as CEO of A.P. Moller-Maersk, as there were several internal and external candidates for the position Andersen has held since 2007.

Uggla will be replaced as Svitzer CEO by Henriette Thygesen, who is currently CEO for the Americas in Maersk's logistics company Damco.