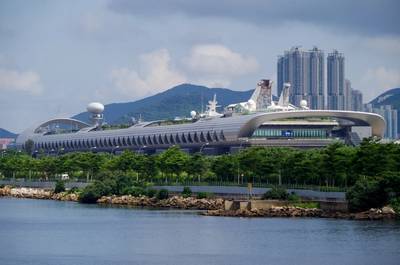 Hong Kong is in "all-out combat" to contain a surge in coronavirus cases, the city's number two official said on Sunday, with the ramping up of community isolation and treatment units helped by mainland Chinese construction teams.

Scenes of people lying outside public hospitals in the rain and chilly weather have shocked many in the global financial hub, leading to an apology from authorities. Officials have now organized facilities to shelter patients amid a drop in temperatures as healthcare facilities are overwhelmed.

Officials reported 6,067 new COVID-19 cases on Sunday, a day after the government announced that the Kai Tak Cruise Terminal would be turned into a dedicated COVID facility with 1,000 beds to mitigate overburdened public hospitals.

Hong Kong's embattled leader Carrie Lam, who attended a ground-breaking ceremony at a construction site for nearly 10,000 COVID units at Penny's Bay close to the city's Disneyland resort, said the initiatives would enhance the city's anti-epidemic capacity "within a very short period of time".

In what was seen as a rebuke to the Hong Kong authorities' handling of the spiraling outbreak, Chinese President Xi Jinping said fighting the virus must now be their "overriding mission", in comments carried in the state-backed Ta Kung Pao newspaper on Wednesday.

Hong Kong's top civil servant, John Lee, said in a blog post on Sunday that the city's "government has entered a state of all-out combat."

The global financial hub's "dynamic zero-COVID" policies, mirroring those in mainland China, have contributed to its current woes and are unsustainable, some experts say.

The city's public hospitals have been severely stretched, struggling to cope with an influx of patients including the elderly, many of whom have resisted vaccinations.

While the city has so far ruled out a city-wide lockdown, authorities are examining mandatory testing for its 7.4 million people.

The city has recorded around 40,000 infections and fewer than 300 coronavirus deaths, far below other major cities. But some epidemiologists expect daily infections to approach 30,000 by the end of March.

China has sent epidemiologists, critical care experts and over 100 testing personnel to the city, as well as mobile testing vehicles, with authorities saying the outbreak could take up to three months to stabilize.

The conversion of public housing estates, rental of commercial hotels and indoor sport centers will add an extra 20,000 extra units for people who tested positive for COVID but had no or mild symptoms for isolation.

An election to choose the city's next leader, initially scheduled for March, has been postponed to May, adding to uncertainty about the former British colony's future as Beijing imposes its rule. read more

TUI Cruises said a second vessel in its cruise ship fleet has successfully tested the use of shore power in port.Earlier this week…