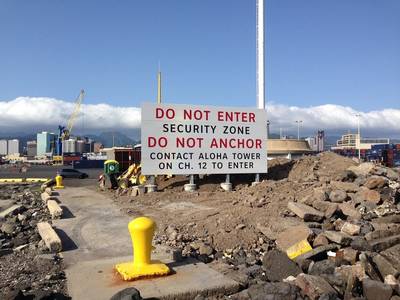 The new sign in Honolulu Harbor will inform mariners of the 24/7 security zone in the harbor and whom to contact for permission to enter. (U.S. Coast Guard photo)

Construction will be completed Friday of a new sign informing mariners of the 24/7 security zone in the Honolulu Harbor and whom to contact for permission to enter, the U.S. Coast Guard (USCG) said in a press announcement.

The sign, measuring 12 x 24 feet, is worded with large letters created using highly reflective tape, will be lit at night and is oriented so that mariners will be able to read the sign while still offshore, outside the security zone.

Located on the Diamond Head side of the Honolulu Harbor entrance, Makai side of Pier 1, the new boating security sign replaces the previous one which the USCG said was difficult to read for vessel traffic entering the harbor and outside the security zone.

According to the USCG, the Harbor Entrance sign is a visible example of the collaborative partnership that exists between the Coast Guard and DOT Harbors in the Port of Honolulu. The sign directs mariners to contact Aloha Tower watchstanders, operated by the Hawaii DOT Harbors Division, who control harbor operations.