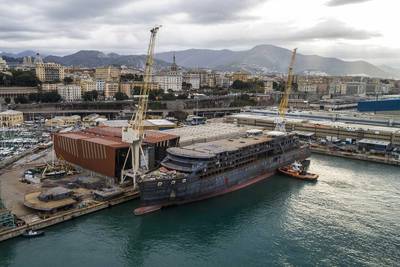 The hull of ultra-luxury expedition ship Seabourn Venture has been transferred from Trieste to Genoa, where the newbuild will undergo final outfitting ahead of its scheduled launch in December.

The hull, with its superstructures built up to deck 9, was built at T. Mariotti and Cimolai's CIMAR shipyard in San Giorgio di Nogaro. The new ship was floated out in Trieste on March 30 and arrived in Genoa on April 10 following the 1,200 mile voyage.

Already equipped with engines, generators and the main equipment of the engine room, Seabourn Venture will complete the final outfitting phase with the integration of further superstructures built in Genoa in recent months, and with the installation of the propulsion systems and interiors.

Seabourn Venture was designed and is being built for diverse environments to PC6 Polar Class standards. It will be equipped with two custom-built submarines as well as 24 zodiacs. The ship will feature 132 oceanfront veranda suites.

Seabourn Venture’s hull arrival coincided with the presence in port of two other Seabourn vessels, Seabourn Sojourn and Seabourn Quest, which arrived in Genoa on April 9 for maintenance work to be performed by T. Mariotti. Both ships were built by the Italian shipyard, in 2010 and 2011 respectively.

A sister ship to Seabourn Venture is slated to launch in 2022.