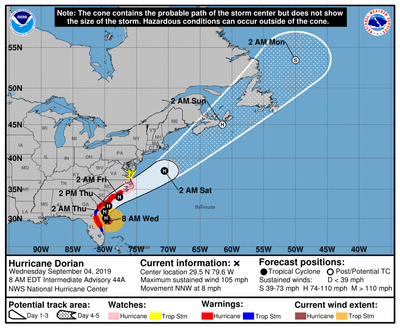 The 8 AM tracking graphic (CREDIT: NHC)

On this track, the core of Hurricane Dorian will move dangerously close to the Florida east coast and the Georgia coast through tonight.  The center of Dorian is forecast to move near or over the coast of South Carolina and North Carolina Thursday through Friday morning.

STORM SURGE: The combination of a dangerous storm surge and the tide will cause normally dry areas near the coast to be flooded by rising waters moving inland from the shoreline.  The water could reach the following heights above ground somewhere in the indicated
areas if the peak surge occurs at the time of high tide...

Water levels could begin to rise well in advance of the arrival of strong winds. The surge will be accompanied by large and destructive waves. Surge-related flooding depends on the how close the center of Dorian comes to the coast, and can vary greatly over short distances.