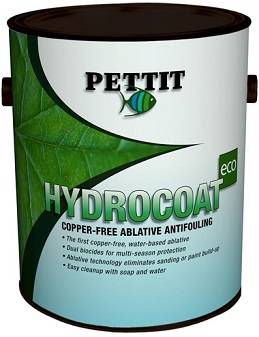 The Hydrocoat name has been synonymous with waterborne, marine ablative technology for almost 20 years. First came Pettit’s award winning Hydrocoat, a multi-season, ablative antifouling paint, which the manufacturer claims was the benchmark for clean, highly effective and easy to use antifoulings. Last year the Hydrocoat line was expanded when the, Hydrocoat SR, reportedly the world’s first and only dual-biocide, water-based, multi-season ablative bottom paint, was introduced to the market. Now, Pettit launched the latest product in the Hydrocoat line up, Hydrocoat Eco.

Hydrocoat Eco incorporates Pettit’s self-polishing, water-based, ablative technology with an organic biocide, Econea. By utilizing the highest level available of this metal-free biocide, in combination with a slime fighting inhibitor, Hydrocoat Eco provides multi-season protection. Pettit’s technology replaces the harsh solvents found in most bottom paints with water. The formula provides the user with an easier application, soap and water clean up, and no heavy solvent smell. Hydrocoat Eco is self-polishing; the paint film wears away with use, eliminating paint build up and the need for sanding. This formula is also copper-free, making it compatible over almost all bottom paints and safe for use on all substrates, including aluminum. With no copper to cause galvanic corrosion issues, Hydrocoat Eco is suitable for bronze IPS and jet drives, outdrives and outboard motors. Hydrocoat Eco will not lose effectiveness when removed from the water, Petit said.

Hydrocoat Eco is available in five colors: white, blue, red, green and black. It is offered in quarts and gallons throughout the United States at marine supply stores and boatyards. Application can be done with a brush, roller or spray.