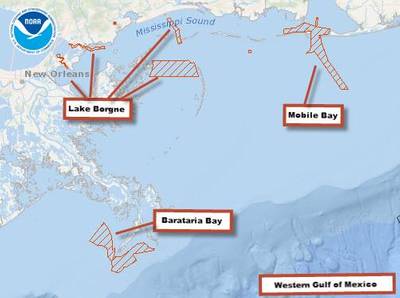 New data will update nautical charts around the country.

As sure as spring arrives, NOAA vessels and independent contractors are hitting the seas for the nation's 180th hydrographic surveying season, collecting data for over two thousand square nautical miles in high-traffic U.S. coastal waters.

"Nautical charts are the foundation for the nation's maritime economy, and NOAA hydrographers spend months at sea, surveying critical areas to ensure safe navigation for the shipping, fishing, and boating communities," said Rear Admiral Gerd Glang, director of the Office of Coast Survey.

"Spring is the traditional beginning of the survey season," Glang explained. "After a winter of data processing and ship maintenance, the NOAA survey ships now join Coast Survey navigation teams who work year round."

U.S. waters cover 3.4 million square nautical miles, including a seafloor that is constantly changing due to storms, erosion, and development. To keep the nation's suite of over a thousand nautical charts up to date, the Office of Coast Survey annually plans hydrographic survey projects to measure water depths and identify new navigational hazards. Survey planners consider requests by marine pilots, port authorities, the Coast Guard, researchers and others when setting the year's schedule.

Alaska's Kodiak Island is one priority this year, and NOAA ships Rainier and Fairweather will update old and sparse depth measurements in response to increased demand from the tourism and commercial fishing industries. Rainier will also work in Cold Bay, charting potential areas of refuge for ships approaching the harbor when currents are strong. Additionally, one of NOAA's hydrographic services contractors will survey Bechevin Bay, the easternmost passage through the Aleutians from the Bering Sea to the Gulf of Alaska.

Before heading to Alaska, the Fairweather will survey south of Washington's San Juan Islands and investigate reported shoaling in Friday Harbor.

Coast Survey's navigation response teams (NRTs), small 2- or 3-person boats equipped with both multibeam and side scan sonar systems, are acquiring data to address possible charting discrepancies - data that is outdated or wrong - and other concerns. NRT6 is working in San Francisco Bay and will later survey two anchorages near Benicia, Calif., to chart a shoal that has migrated toward the federal channel.

Hydrographic surveys are always in high demand in the Gulf of Mexico. This year, NRT4 is responding to requests by pilots and port authorities to survey Galveston Bay and its vicinity. A NOAA contractor will survey in Louisiana, offshore of Barataria Bay, to acquire the data necessary to establish turnoffs and turning basins for large vessels. A contractor will also survey the approaches to Lake Borgne/Lake Ponchartrain in Louisiana, where some chart data is from the 1800s.

Surveys are planned for approach lanes to ports in Mobile Bay, Ala., and Panama City, Fla. Additionally, NRT1 is investigating shoaling and a changing channel course in Grand Lagoon, and measuring depths and features in West Bay and West Bay Creek, along the Gulf Intracoastal Waterway around Panama City. After they finish up in Florida, NRT1 will continue the rest of the 2014 survey season in Louisiana.

As we come up the East Coast, NRT2 will investigate hazards to navigation in the waters of a proposed anchorage area near Jacksonville, Fla., in response to a request from the U.S. Coast Guard.

The Coast Survey Research Vessel Bay Hydro II will survey critical areas in central Chesapeake Bay. The NOAA Ship Ferdinand R. Hassler will survey a possible wind turbine site in the approaches to the Bay. Before the Hassler does that, however, it will survey off the coast of Portsmouth, N.H. to acquire data that will contribute to habitat mapping and to the state's effort to locate sand resources for beach replenishment.

Finally, the Thomas Jefferson and Hassler will survey an area offshore of Rhode Island Sound to identify a safe route for deep draft oil tankers. The area is also a potential site for wind turbines.