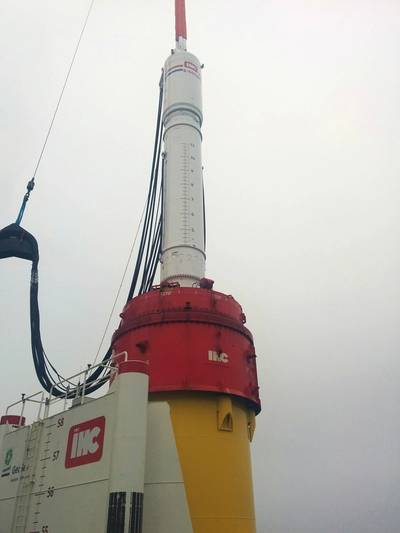 IHC IQIP has launched its new S-4000 Hydrohammer pile-driving system. The Royal IHC business unit’s latest development in hydraulic impact hammers is the largest available on the market, and enables the installation of offshore foundations in even the toughest ground conditions with the largest type of monopile. It‘s also suitable for applications in the oil and gas industry.
As offshore wind farms are predicted to move further offshore into deeper waters, the demand for larger monopiles and, subsequently, larger hammers is also expected to increase. Built using proven technology, the Hydrohammer has a strike power of 4,000kJ.
The S-4000’s slim body design allows for easy handling and can be used in parallel with other IHC IQIP systems, such as the Noise Mitigation System (NMS) and existing pile sleeves (from 108-in. to 6.5m in diameter). Oil supply has also been upgraded through the implementation of new 3-in. hydraulic hoses, which can also be stored on deck with the Hose Reel 12-80 series.
In addition, the lifting and movement of the hammer has been improved thanks to the new up-end cradles that facilitate easier transportation. Through the development of this supplementary technology, IHC IQIP has been seeking to proactively support the market demand for larger hammer specifications.
IHC IQIP has already supplied a fully operational S-4000 unit to DEME Group’s offshore marine engineering division GeoSea, which specialises in complex engineering projects. The relationship between IHC and GeoSea has long been productive, and the handover period of the S-4000 was a successful one. It has been delivered to the 41.3 sq. km Nordsee One offshore wind farm project in the German North Sea, which has an average water depth of between 25 and 29m. GeoSea already successfully installed more than 10 monopiles with the S-4000, after installing the first 30 monopiles with the Hydrohammer S-3000.