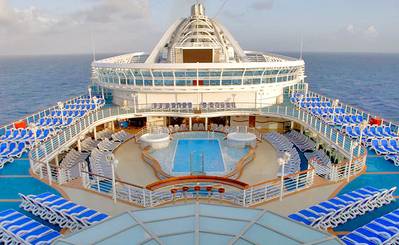 Princess Cruises' new service from the Port of Houston Authority's Bayport Cruise Terminal in Pasadena, Texas, kicks off with a four-day benefit cruise aboard 'Caribbean Princess' to Progreso, Mexico. About 2,000 passengers supported "Cruising for a Cause" and the first-ever fundraising cruise is expected to raise up to $1 million for two U.S. military veterans' organizations: the Vietnam Veterans Memorial Fund and Operation Homefront.

After this first voyage, to conclude on 9, November, 2013, Caribbean Princess is scheduled to begin, with a total of 27 sailings from the Houston terminal. Princess' regular Western Caribbean cruise schedule includes calls at the ports of Costa Maya, Roatan, Belize City and Cozumel. Next year, the Emerald Princess will make Houston its home port for western Caribbean sailings.

Princess Cruises is one of two cruise lines scheduled to regularly call the Bayport Terminal. Starting in fall 2014, Norwegian Cruise Line will bring its 2,374-passenger Norwegian Jewel to Houston to sail seven-day
Western Caribbean cruises through the 2017 cruise season.

The activity from both cruise lines will have a significant positive impact on the economies of Harris County and the greater Houston area, attracting more than 400,000 passengers to the region over the next four years.