Australian shipbuilder Incat said it has secured a contract to build the world’s largest aluminium ship.

Incat Tasmania Pty Ltd will build the 130 meter long ship for long standing customer, Buquebus to operate between Argentina and Uruguay.
The completed vessel will be the largest aluminium ferry ever built and the ninth vessel for Incat’s valued South American customer.

The 130-meter ferry will join the other Incat ships already serving various ports on the River Plate (Rio Plato) between Argentina and Uruguay.
At a probable 13,000 gross registered tonnes the 130-meter long, 32-meter wide vessel will carry 2100 passengers and 220 cars. The duty free shop will be World’s largest fitted on a ship, with over 3,000 square meters of retail floor space, similar in size to a large airport duty free shop.

Work is underway on design and engineering, the physical construction will commence as soon as the detail design drawings are completed and approved by the customer.

The new Buquebus ship, Incat hull 096, is predicted to have a maximum speed of over 40 knots. The 130-meter ship will be powered by four dual fuel engines that will burn environmentally friendly LNG while in service between Argentina and Uruguay.

Incat shipyard currently has confirmed orders covering the next four years with high expectations of other large vessel orders. The workforce now totaling over 600 will be expanded to facilitate the construction of the new vessels in Incat’s very healthy order book. 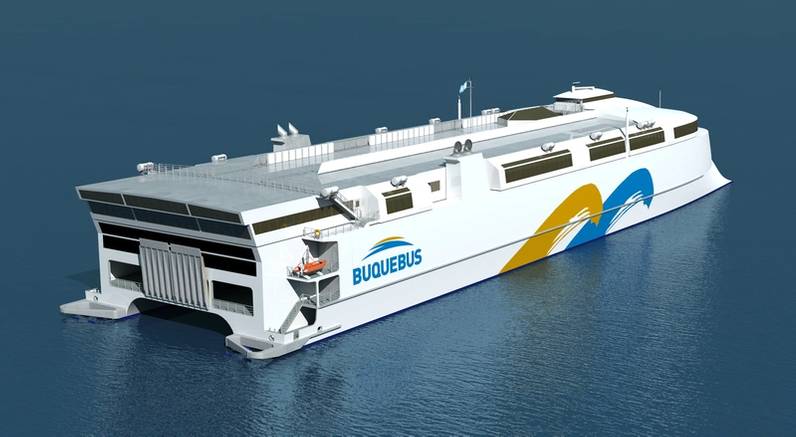