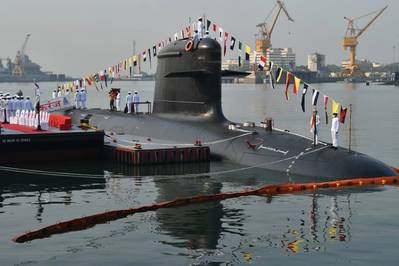 The Scorpene is a 2,000-ton conventional-propulsion submarine designed and developed by Naval Group for all types of mission, such as surface vessel warfare, anti-submarine warfare, long-range strikes, special operations or intelligence gathering. Extremely stealthy and fast, it has a level of operating automation that allows a limited number of crew, which reduces its operating costs significantly. Its combat edge is highlighted by the fact that it has six weapon launching tubes, 18 weapons (torpedoes, missiles, mines).

The sub is a product of the Indian government's indigenous submarines construction program. This vessel has been completely built by Mazagon Dock Shipbuilders Limited (MDL) with limited external support, taking advantage of the technology transfer from Naval Group during the construction and trials of the first two boats. This series of six submarines have been fitted with a number of equipment, built in India by qualified and highly trained industrial Micro, Small & Medium Enterprises (MSMEs) which form the sound base of submarine building ecosystem of India.

"This program is a major element of the strategic autonomy enjoyed by the Indo-French partnership and strategic autonomy, developed over the last decades, said Pierre-Eric Pommellet, CEO & Chairman of Naval Group. "The commissioning of INS Karanj, amidst COVID-19 challenges, represents one of its kind industrial milestones and illustrates the Aatmanirbharta (self-reliance) of Indian Navy and naval defense industry."