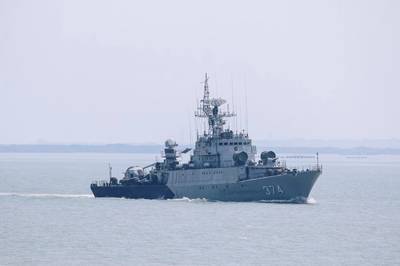 For illustration only - An Indonesian Navy vessel - ©Reezky/AdobeStock

Indonesia deployed navy ships and hundreds of personnel on Wednesday, including intelligence assets, in an effort to thwart illegal shipments of refined palm oil olein, just hours away from an export ban aimed at taming surging cooking oil prices.

The new rules were due to take effect at midnight local time (1700 GMT), and the navy and other agencies had been instructed to step up patrols of Indonesian waters to ensure compliance, said navy spokesperson Julius Widjojono.

Palm oil futures on the Malaysia exchange surged by 9.8% on Wednesday, as some market participants feared exporters in Indonesia, the world's biggest palm oil producer, could not get their products onboard vessels in time before the ban starts.

The curbs have been imposed on all producers of refined, bleached and deodorized (RBD) palm olein, which is made by processing crushed palm fruit to remove impurities, and accounts for about 40% of Indonesia's total shipments of palm oil products, according to analysts' estimates.

An Indonesian trade ministry regulation detailing the implementation of the rules had yet to be made public, but palm industry participants had been briefed by the economics ministry, said Eddy Martono, secretary-general of the Indonesia Palm Oil Association (GAPKI).

The industry was trying to "operate as usual while continuing to monitor market movements", he said.

Eddy said that with such short notice on the ban, first announced by President Joko Widodo on Friday evening, there was no way exporters could rush their products out.

"Its impossible to get a vessel instantly, everything would've been chartered," he said.

Indonesia's restrictions have driven up global edible oil prices as supplies were already choked by factors like drought and shortages due to after Russia's invasion of major crop producer Ukraine.

Indonesia's ban on palm oil exports is unlikely to last more than a month due to limited infrastructure to store the surplus oil and because of mounting pressure from buyers to resume shipments, industry officials said.

Plantation company Astra Agro Lestari said it would comply with the rules.

"Astra Agro runs its business opportunistically, so we would consider the most profitable price offer and of course it must comply with existing regulations," company spokesperson Fenny Sofyan said.

The ban would remain in place until prices of bulk cooking oil dropped to 14,000 rupiah ($0.9720) per liter, coordinating economics minister Airlangga Hartato said.

He was due to hold a media briefing on palm oil at 1230 GMT on Wednesday.

In Jakarta, bulk cooking oil prices were offered at around 19,000-20,000 rupiah ($1.32-$1.39) on Wednesday, and in other regions prices could be higher, Reynaldi Sarijowan, a senior official at the traditional market traders' association, said.

In Riau province on Sumatra island, small farmers already saw a drastic drop in price of palm oil fruits due to the export ban, local planters said, and they fear that palm oil companies will stop buying from independent farmers.

Meanwhile, exports of crude palm oil and other refined products will still be allowed, but authorities have threatened to widen the ban if shortages persist at home, according to a government document.

GAPKI's Eddy said that in 2021, domestic consumption of RBD palm olein was 8.3 million tonnes and Indonesia may face storage issues if the ban is prolonged.