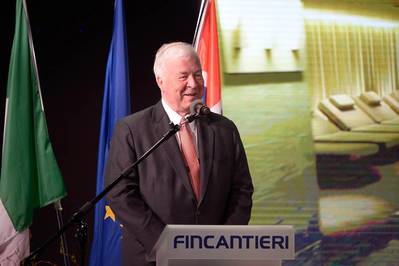 The delivery ceremony took place on March 28 when the ship was presented at Fincantieri's Marghera shipyard outside of Venice, Italy. On April 11, Viking Star will set sail from Istanbul and will make her way through the Mediterranean and into the Atlantic on her way to be officially christened on May 17 in Bergen, Norway.

Classified by Cruise Critic as a "small ship," the all-veranda Viking Star has a gross tonnage of 47,800 tons, boasts 465 cabins and will accommodate 930 passengers. It is engineered at a scale that allows direct access into most ports, so guests have an easy and efficient embarkation and debarkation. Light-filled with modern Scandinavian decor, the ship was designed by experienced nautical architects and engineers, including the same interior design team responsible for the fleet of Viking Longships. Viking Star is one of three ocean cruise ships on order; the remaining two ships, Viking Sea and Viking Sky, are currently under construction.