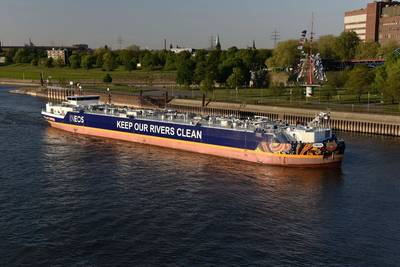 UK-based chemicals company Ineos said Wednesday it has accepted delivery of three of four new gas barges that will be used to transport butane gas from the ARA region (Antwerp, Rotterdam, Amsterdam) to the Ineos ethylene cracker facility at Koln, Germany. In addition, they will provide INEOS Trading & Shipping with options to effectively trade butane in Europe.

The new gas barges will become the largest operating on the River Rhine and are the first to be fully built to the new ADN gas barge 2019 standard.

Hugh Carmichael, Feedstocks Trading Director of INEOS Trading & Shipping said, “This supersized delivery is the result of a four-year project to design and build this new class of barge. They have three times the cargo capacity of typical gas barges.”

The build project was managed by Imperial Gas Barging, who will also operate the barges on behalf of Ineos. The construction of the barges was split between two Dutch companies: Teamco Shipyard in Heusden, who subcontracted Hull construction to Rensen-Driessen Shipbuilding B.V of the Netherlands and then had work completed by the partner Stocznia Sp. Zo.o. Shipyard; and Veka Shipbuilding Group in Werkendam, who completed all of the construction in Holland.

The gas tanks were manufactured by Barlage GMbH. The barges all use a veth pod-drive system, rather than the more usual shaft propulsion.

The barges will be named Aloo, Brinjal and Onion, taking their names from the Indian Bhaji theme.