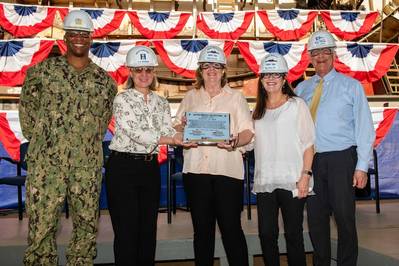 HII on Wednesday announced its Ingalls Shipbuilding division authenticated the keel of the Arleigh Burke-class guided missile destroyer Jeremiah Denton (DDG 129). The ship’s name honors former U.S. Sen. Jeremiah Denton Jr., a Vietnam War veteran who was awarded the Navy Cross for his heroism while a prisoner of war.

“Today, we honor the example of heroism and dedicated service to our nation set by the namesake of this ship,” Ingalls Shipbuilding President Kari Wilkinson said. “The inspiring story of Senator Denton reminds us of why we do what we do every day here at Ingalls. We have the highest level of respect for our namesake and are grateful to our sponsors, the daughters of our namesake, for honoring their father’s legacy with us today.”

Denton spent 34 years as a naval aviator, including eight years of torture as a prisoner of war in Vietnam. He is known for his act of genius during a televised broadcast in captivity, when Denton spelled out the word “torture” through Morse code using his eyes to blink the code. Following his career in the Navy, Denton was elected to the U.S. Senate representing his home state of Alabama in 1980.

U.S. Sen. Roger Wicker delivered remarks highlighting the significance of Denton’s contributions to the nation during his time in the Navy and Senate.

The ship’s co-sponsors and daughters of the namesake, Madeleine Denton Doak and Mary Denton Lewis, were in attendance and joined Ingalls shipbuilders in welding their initials onto a steel plate, signifying the keel of DDG 129 as being “truly and fairly laid.” The plate will remain affixed to the ship throughout its lifetime.

Jeremiah Denton is the third Flight III destroyer to be constructed at Ingalls Shipbuilding. The Flight III upgrade incorporates a number of design modifications that collectively provide significantly enhanced capability.

Arleigh Burke-class destroyers are highly capable, multi-mission ships and can conduct a variety of operations, from peacetime presence and crisis management to sea control and power projection, all in support of the U.S. military strategy. Guided missile destroyers are capable of simultaneously fighting air, surface and subsurface battles. The ship contains myriad offensive and defensive weapons designed to support maritime defense needs well into the 21st century.