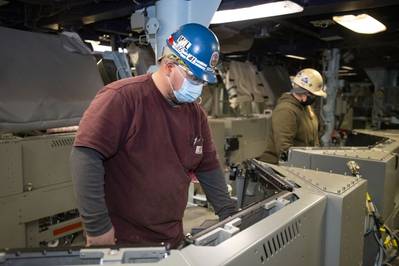 “I am again very proud of our DDG 51 team and the work they have done,” said Kari Wilkinson, Ingalls Shipbuilding president. “Not only have they completed a significant program milestone aboard the first Flight III destroyer, but they have done so in the face of a pandemic. This team continues to prove it’s as strong as the ships it builds.”

The Flight III upgrade incorporates a number of design modifications that collectively provide significantly enhanced capability. Aegis light-off is an important milestone for integrating and activating all of the new electric plant equipment and combat systems.

“Through perseverance, a good plan, execution of that plan and relentless follow up, our shipbuilders have reached ALO,” said Jeff J. Davis, DDG 125 construction manager. “There is a huge collaboration effort between Ingalls, the Navy, industry partners and multiple other contractors.”

Arleigh Burke-class destroyers are highly capable, multi-mission ships and can conduct a variety of operations, from peacetime presence and crisis management to sea control and power projection. Equipped with a myriad of offensive and defensive weapons, guided missile destroyers are capable of simultaneously fighting air, surface and subsurface battles.