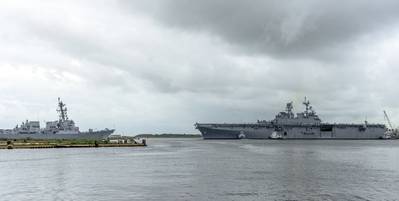 “The amphibious warship production line is a critical component of our nation’s defense industrial base,” Ingalls Shipbuilding President Kari Wilkinson said. “This funding will strengthen our suppliers and sustain jobs across the country in support of LHA 9 construction.”

Ingalls is the sole builder of large-deck amphibious ships for the Navy. The shipyard delivered its first amphibious assault ship, the Iwo Jima-class USS Tripoli (LPH 10), in 1966. Ingalls has since built five Tarawa-class (LHA 1) ships, eight Wasp-class (LHD 1) ships and the first in the new America class of amphibious assault ships (LHA 6) in 2014. The second ship in the America class, USS Tripoli (LHA 7), was delivered to the Navy in early 2020. Bougainville (LHA 8) is under construction.