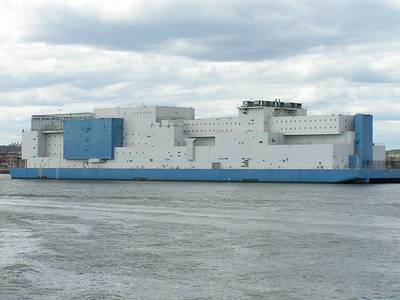 An inmate has died after jumping overboard from a New York City jail barge, the city Department of Correction announced.

Police officers pulled Gregory Acevedo from the after after he reportedly climbed a fence at the Vernon C. Bain Center and jumped into the East River on Tuesday. The man was taken to the hospital but was pronounced dead after efforts to revive him were unsuccessful, according to officials.

The Vernon C. Bain Center, also known as the Vernon C. Bain Maritime Facility, is a a 625-foot barge built for $161 million at Avondale Shipyard in Louisiana that opened as a jail in 1992. It is docked in the East River off the Bronx, across from Rikers Island.

“Mr. Acevedo’s tragic passing is an immense loss," Correction Commissioner Louis A. Molina said. "We are conducting a preliminary investigation of this incident. Our thoughts and prayers are with his loved ones at this difficult time.”

The New York state attorney general's office and the city Department of Investigation conduct separate investigations into the death. The city medical examiner's office will determine the cause.

Acevedo had been in custody on a robbery charge since February.

Multicat Made from Scaffold