Insights from the 50th International Congress of Maritime Museums

Celia Konowe is from Reston, Virginia, recently graduating from the University...

For many, the ocean is life. It provides transportation, work, commerce, food, recreation—tales as old as time and shared by people across the globe. These stories are lived day to day, passed down between generations, and shared with the public through various media. Maritime museums assume responsibility to share these histories while honoring the communities shaped ocean exploration and commerce. In a decade where ocean health and climatic events have become a primary focus, museums have the added challenge of sharing the urgency of marine conservation while engaging and educating through storytelling and immersive experiences. How do they do it all at once?

The International Congress of Maritime Museums (ICMM) was recently held in Halifax, Nova Scotia, to tackle this assignment. The gathering was special, achieving multiple historical markers simultaneously as the first since the pandemic, the 50th Congress since its formal inception in 1972, and coinciding with the 500th anniversary of the return of Ferdinand Magellan’s fleet from circumnavigating the globe in 1522. This year’s Congress also featured a full carbon offset, thanks to donations made to the Ocean Foundation’s SeaGrass Grow program. Hosted by the Maritime Museum of the Atlantic in downtown Halifax, the conference’s proceedings were held at the Canadian Museum of Immigration at Pier 21. A fitting location, the facility is not only Canada’s last existing former port of immigration, but it welcomed almost one million migrants who arrived by boat from 1928 to 1971. Today, the seaport is also a common docking point for cruise ships, which were visible through the conference room’s windows all week and served as an ample reminder of the role of tourism in maritime livelihoods and history.

This year’s congress focused on ocean health, preservation and the wellbeing of communities, said Dr. Matthew Tanner MBE, ICMM president and chief executive of the SS Great Britain Trust, in his opening speech. There’s a dominance of art museums in culture, he added, yet maritime museums often have even more to say about the current world when one considers exploration, commerce, immigration, livelihoods and that more than one third of the total population lives within 60 miles (100 km) of an oceanic coast, according to NASA. 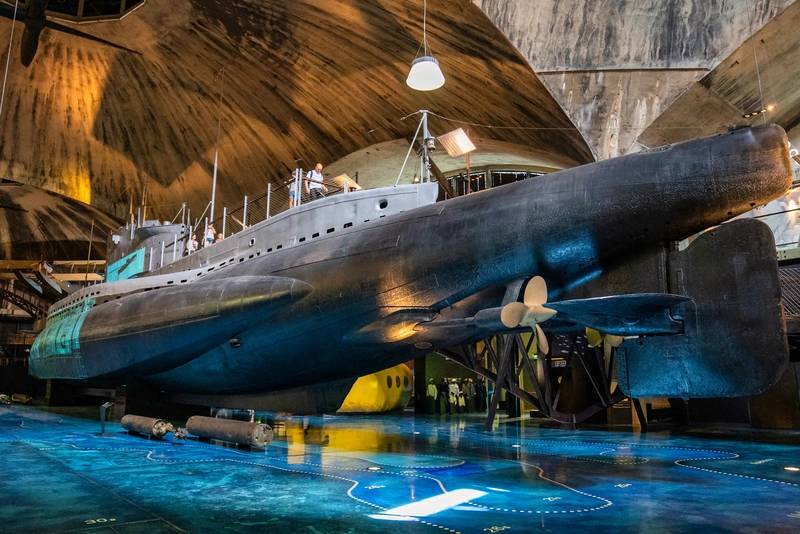 As a country trying to make reparation after centuries of indigenous genocide and land colonization, Canada has begun to focus on inclusivity and diversity in many discussions —maritime museums included. Dr. Jerry Bannister, director of the marine affairs program at Dalhousie University in Halifax, explained that museums have the power to set the infrastructure for what tourists should see and learn while visiting. When working with and on colonized land, he advised, there are three angles to keep in mind:

1. Content—what histories do we discuss?
2. Perspective—how do we frame these histories?
3. Personnel—who designs the exhibits and who do you hire or bring into the collaboration?

These are some of many current crucial questions for museum boards, historians and artists. “Talking openly about the past and embracing stories and forms of storytelling are powerful actions to begin correcting our mistakes,” Bannister said.

When creating inclusive exhibits that engage with traumatic histories, museums should be prepared to navigate tense discussions and possible conflict within communities where members have unique perspectives and identities to share. “Start partnerships early, before starting work on exhibits,” Bannister said. Accept that conflict may happen between people who want different parts of their stories shared and leave space for self-definition within a group—keep in mind how heterogeneous and complex each culture is. “The worry I have,” he added, “is that when you put things in an indigenous context, or an African Canadian context, there is so much diversity within a particular group based on how they define. Don’t go into a dialogue thinking that because someone belongs to one group that the other group is necessarily unified.”

An example is the Maritime Museum of the Atlantic’s exhibit, titled Ta'n me'j Tel-keknuo'ltiek: How Unique We Still Are, which shares the traditional and ongoing connection of the Mi’kmaq people to the land and waters of Mi’kma’ki (most of the region referred to as Atlantic Canada). “Whenever we work with the museum advisory board on a new exhibit, we bring diverse opinions to show the diversity that exists within Mi’kmaw culture,” said Raymond Sewell, a L’nu poet, singer-songwriter and English professor from Pabineau, First Nation, New Brunswick. “We have people from Cape Breton, from New Brunswick, from different areas, and a lot of those stories are included. We have all different kinds of opinions, but we make sure they’re all valued. So, we may have less content in terms of fewer digestible sections of an exhibit, but we have more types of stories.”

However, not all exhibits are as inclusive the first time around. In 1987, the museum opened a temporary exhibit about the infamous Halifax Explosion of 1917, A Moment in Time. Thanks to an overwhelming response from the public, a permanent version of the exhibit, titled Halifax Wrecked, was created several years ago to commemorate the 100th anniversary of the devastating event. Museum curators and artists redesigned the exhibit with a lens of inclusion and diversity, aiming to share stories that had been previously neglected. Kim Reinhardt, general manager of the museum, explained how two significant communities had been left out of the original exhibits: the Mi’kmaw community known as Kepe'kek, or Turtle Grove, that was almost entirely wiped out by the explosion, and the waterfront community of Africville and its African-Nova Scotian residents who were both killed by the impact and contributed greatly to remediation efforts in the aftermath. The updated exhibit, Explosion in the Narrows, opened in 2019 and provides an important lesson in revision, listening, and commemorating to maritime museums worldwide. 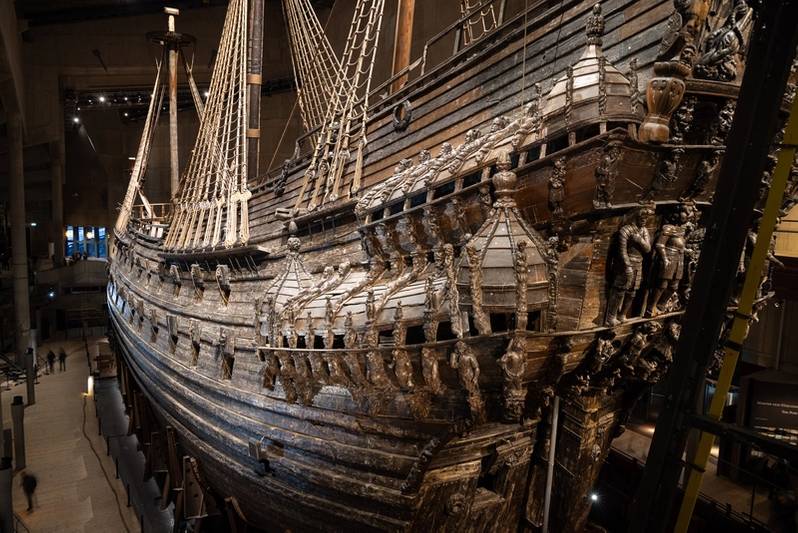 The magnificent wooden Vasa warship salvaged from the sea and displayed at Vasa Museum. Swedish warship that was built from 1626 to 1628. Copyright boumenjapet/AdobeStock

Museums also play a dual role as the oceans face increasing rates of temperature and sea level rise, biodiversity loss and severe storm impacts. In dire times, museums are a form of communication, explained Anya Waite, the CEO and scientific director of the Ocean Frontier Institute and associate vice-president research (ocean) at Dalhousie. “They influence how we engage and interact with the oceans commercially, socially and scientifically.” Waite also believes that museums have a role in telling a new story about the sea—one where the ocean is the main character: “We need to let into our understanding that the ocean isn’t just impacted by climate; the ocean controls climate and delivers climate outcomes to the world. So, I think it’s that switching of the narrative between the ocean’s a victim to the ocean’s a powerhouse actor.” By moving beyond the pity act, humanity can begin to understand the ocean’s full capabilities and act accordingly to mitigate future impacts and conserve ecosystems and resources.

Ocean literacy is the second role that museums should undertake regarding the sea and climate change, and its popularity as a subject is increasing as more scientists, communicators, historians, policymakers and artists learn of its importance. As defined by UNESCO, ocean literacy is “an understanding of the ocean’s influence on you and your influence on the ocean.” In short, someone proficient in ocean literacy understands the reciprocal relationship between oceans and humankind—a necessary skill when trying to communicate about climate change and its impact on the seas and dependent communities around the world.

Beyond sharing knowledge and exchanging advice, no museum conference is complete without announcements of new and exciting projects and exhibitions. Across the board, museum staff and representatives shared plans to focus content and engagement on sustainability, ocean conservation and climate impacts, diverse and inclusive stories, and environmental justice. Some, like the Peabody Essex Museum in Salem, Massachusetts, have begun climate and environment initiatives to consider humanity’s changing relationship with the world, inspire reflection and discussion amongst visitors, and spark action.

Others boasted new and updated museums, some of which have yet to open their doors.

-The Hong Kong Maritime Museum shared their recent relocation and expansion of public and educational programming and the future opening of their Swire Marine Discovery Center next year.

-In Sweden, Vrak — Museum of Wrecks opened just over a year ago with the goal of broadening views, knowledge and experience through its focus on shipwrecks in the Baltics. The maritime archeology museum utilizes digital technology to bring the public closer to some of tens of thousands of wrecks without having to remove them from the seafloor where they’re well preserved.

-La Musée National de la Marine, which is spread across five sites in France, will reopen its Palais de Chaillot (Paris) location after almost seven years of renovation to create and redesign exhibits to share the history of France, humanity and the sea. Vincent Campredon, director of the museum, said the space aims to be a “bridge between history and legend, between waking and dream, between the past and the future.”

Plotting a course for ICMM’s future

The week’s proceedings, complete with activities like a trip to Lunenburg, a UNESCO World Heritage Site, and a ride on the historical Bluenose II schooner, rounded out a week of extensive discussions around oceanic history, climate science and the future of maritime museum work. It also set the tone for the next congress, slated for 2024 in the Low Countries.

Additionally, this year’s ICMM not only celebrated 50 years of maritime museum collaboration and knowledge exchange, but marked a turning point for the next 50, according to Tanner. There are three big, contemporary issues, he explained—migration, climate change and international relations—that will drive much of the way humans engage with and understand maritime history and the industry. These are “living histories,” and the responsibility will fall on museums to convey the stories of millions while engaging the public on the past, present and future of our shared ocean connection. 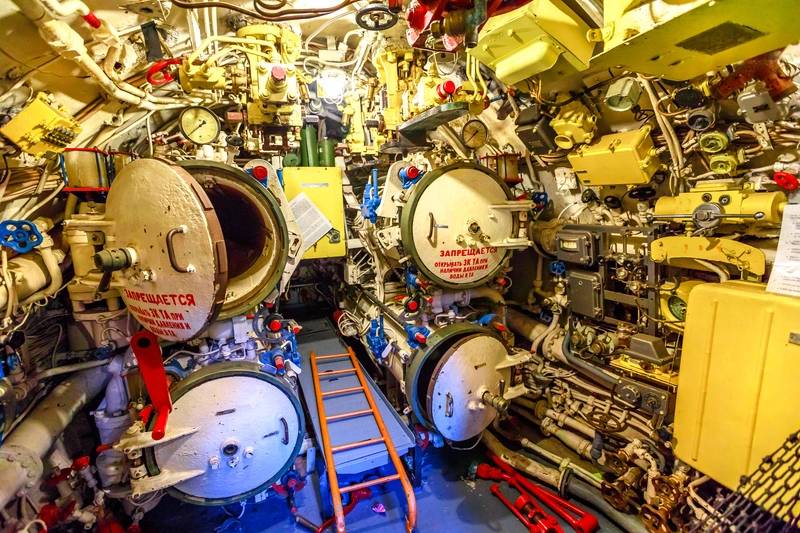