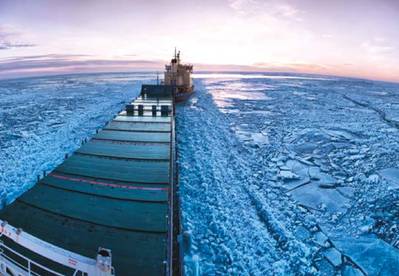 The Russian Maritime Register of Shipping (RS) recently hosted a St. Petersburg international conference 'Arctic Shipping and Offshore Activities: Responding to Safety and Environmental Challenges' . The conference was attended by key figures with interests in Arctic develoment, including the Secretary-General of the International Maritime Organisation (IMO) Mr Koji Sekimizu. A synopsis of the proceedings follows:

The international maritime community is focusing on the Northern Sea Route (NSR) as a measure to reduce the costs as well as time of cargo transportation, the latter resulting in reduction of CO2 emissions. At the same time the safety of a ship in the harsh ice conditions and protection of the fragile Arctic ecosystems remain a major challenge to the industry.

During the conference the experts discussed possible solutions from technical as well as regulatory standpoints. The yards shared their experience in the innovative approach to ice class ships’ design while the representatives of maritime administrations touched upon various issues concerning the Polar Code. Also widely debated was the ice retreat theory bringing to light different approaches to ice retreat forecast, which all in all confirms the number of the high ice class ships and icebreakers required is continuously increasing.

Notably, participants unanimously agreed on the need for the development of the Polar Code.  According to the IMO Secretary-General, the Polar Code may be implemented by IMO in 2017. He emphasised that IMO needs good scientific and technical base to complete the code and therefore, expressed his gratitude to RS for dedicating the conference to technical discussions of Arctic shipping development among the leading experts in design, construction and operation of sea transport.

The conference was organised as part of the RS 100-anniversary celebration programme. “Most of the RS 100 year long history has been devoted to promoting the safety of navigation in harsh ice conditions including the Northern Sea Route,” said RS CEO Sergey Sedov.

A high-tech workboat is more than halfway through its record-setting journey to autonomously circumnavigate Denmark.The Nellie Bly…